Forty-five miles south east of the heart of modern Athens, the historic Attica peninsula comes to an end in a craggy rocky cliff that juts into the middle of the sea. The cape is of unparalleled beauty, fitting for the landmass that has been the scene of so much history and human achievement.

This rocky point is none other then the fabled Cape Sounion [Grk: Aκρωτήριο Σούνιο] or just Sounio—for short. It is in fact the southernmost point of the historic Attica peninsula, where the Greek capital is located. Legend has it that Cape Sounion is where the king of Athens, Aegeus, jumped off 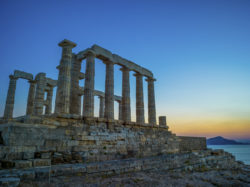 of the cliff in despair upon learning of his son, Theseus’, supposed death. Theseus was returning from Crete where he set out to slay the infamous half man-half bull Minotaur. They had agreed that if Theseus had survived his journey he would fly a white sail on his ship. Tragically, he forgot to hoist the white sail rounding Cape Sounion, instead flying a black sail giving the signal that he had not survived. Upon seeing this King Aegeus is said to have leapt to his death in the sea below, which was to take his name as the Aegean Sea.

The Cape is bounded by the edge of the Saronic Gulf, and overlooks the expansive Aegean Sea stretching as far as the eye can see. And if its two things Sounio has become known for, it would be its otherworldly sunsets and sunrises, as well as the ruined Temple of Poseidon crowning the edge of the cliff that stands very high above the waves. It is no surprise that the temple is dedicated to Poseidon, the god of the sea. After all it is quite literally the best place for the Greeks, a widely acknowledged sea-faring people, to pray and sacrifice at the temple to have a safe journey at sea.

Like the Parthenon, the Temple was built in the age of Pericles around 440BC and is made from local white marble. Originally the temple consisted of 34 Doric columns, with 6 columns forming the porches on each end. The columns are each 20 feet tall, more than 3 feet thick at the base, and more than 2.5 feet thick at their tops. Of the original 34 columns, 15 of them still stand in vivid contrast to the sparkling azure waters of the Aegean behind them.

If one thing is clear about Cape Sounion, it’s that the Ancient Greeks sure knew how to pick a good site for a temple. The Temple would be the last thing Athenian sailors would see of their homeland when setting sail, and the first thing that would greet them back to their home. On a clear day, you can see the island of Kea and Kythnos and straight across to the Peloponnese peninsula.