Written by GreekBoston.com in Modern Greek History Comments Off on Greek War of Independence

Each year, both the people of Greece and those of Greek descent living throughout the world celebrate Greek Independence Day on March 25. They pin white and blue ribbons on their clothes and carry their Greek flags with pride while they celebrate their independence from the Ottoman Empire after a nearly 400 year rule.

What’s interesting about this is that March 25 actually commemorates the beginning of the conflict, not the end. Today, learning about the Greek War of Independence, which is sometimes also referred to as the Greek Revolution, reminds the Greek people of not only how far they’ve come but also what they are truly capable of when they unite for a common cause.

Occupation by the Ottoman Empire

When Constantinople fell to the Ottomans in 1453, this began a long, four hundred year period of occupation in Greece by the Ottoman Empire. It is during this time when the Turks banned the practice of the Orthodox Christian religion and devout Christians had to worship in secret. To this day, you can still visit some of the churches and schools from that time period which were often located inside c

The Ottomans also influenced the culture of Greece. This can be observed even today through cultures’ music, cuisine, dancing, and even some of the cultural traditions.s. 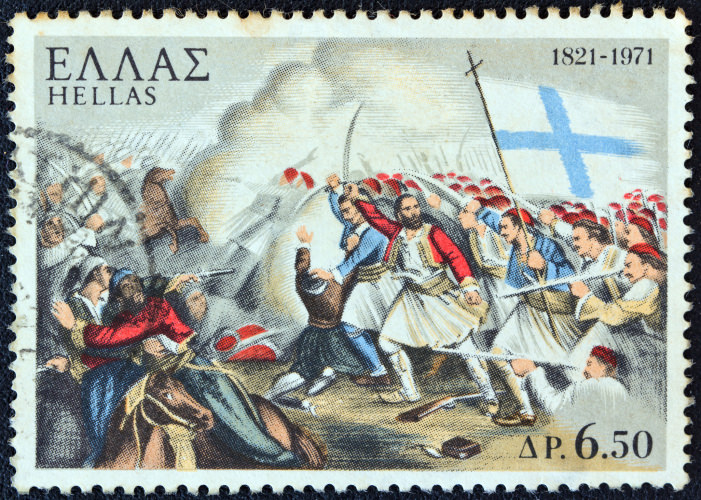 Though the Ottoman reign was far from peaceful, it wasn’t until the 1800’s that the Greek War of Independence began with the start of a resistance group called the Filiki Eteria in 1814.

Though there were some battles and uprisings throughout this time, the most successful took place on March 6, 1821. The official beginning of the revolution was declared on March 25, 1821.

The War for Independence Ends

Though it started as an internal movement, Greece later received help from countries like Russia, The United Kingdom, France, and other allies from the West. With the help of these countries and through the fighting spirit of the Greek people, they were eventually victorious.

The Greek War of Independence, overall, was a bloody and difficult conflict for the people of Greece. However, they eventually achieved their objective – to be free from the Ottoman Empire. On July 21, 1832 the conflict reached its official end.

Even though the Greeks were ultimately victorious, it was not without its consequences. The aftermath brought a time of political turbulence to the people of Greece. They endured monarchies, political upheavals, even a military junta. Yet, the most important thing to remember is that to this day, they are still thankful that they are no longer ruled by the Turks.