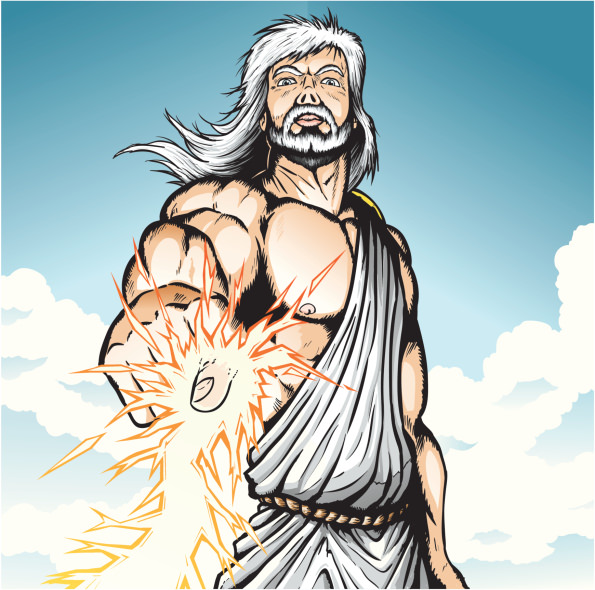 According to ancient Greek creation store, Chaos was the beginning of everything. Some stories explain Chaos as a void of nothingness. Others highlight the fact that Chaos was the first Greek deity. He existed alone before Gaia appeared. While Chaos was the void, Gaia was Mother Earth. In the stories where Gaia was the first deity, she gave birth to Uranus without having had a partner. Gaia and Uranus became husband and wife and parented the Titan Gods and Goddesses. Gaia and Uranus were also the parents of Cyclops and a fifty-headed monster.

There were twelve Titans total – six female and six male. They paired off to form six married couples. The Titans were Oceanus, Tethys, Hyperion, Theia, Crius, Mnemosyne, Coeus, Phoepe, Cronus, and Rhea. Cronus and Rhea were the parents of several of the Olympians. Cronus was told that his children would overthrow him. Rather than take any chances, he ate them. Rhea tricked Cronus in order to spare Zeus. When Zeus was grown, he freed his siblings and overthrew his father, thus making him the new King of the Gods. Some of the Titans, such as Rhea, were still mentioned in stories that featured the Olympians.

After the Titan Wars, the Olympian gods and goddesses took over. They moved to the top of Mount Olympus where they were able to rule and oversee the mortals in their daily lives. The twelve Olympians were Zeus, Hera, Poseidon, Demeter, Athena, Apollo, Artemis, Ares, Aphrodite, Hephaestus, Hermes, Hestia, and Dionysius. Zeus, Hera, Poseidon, Demeter, and Hestia were all children of Cronus and Rhea. Thus, the prophecy came true. Note that Hades was also the brother of Poseidon and Zeus but he wasn’t one of the Olympians. He became King of the Underworld.

Other Gods and Goddesses

The Ancient Greeks were polytheistic, meaning that they worshipped multiple gods and goddesses. Each god and goddess has his or her own purpose. It seems that they were tied into the very way the Greeks understood life and the world around them.