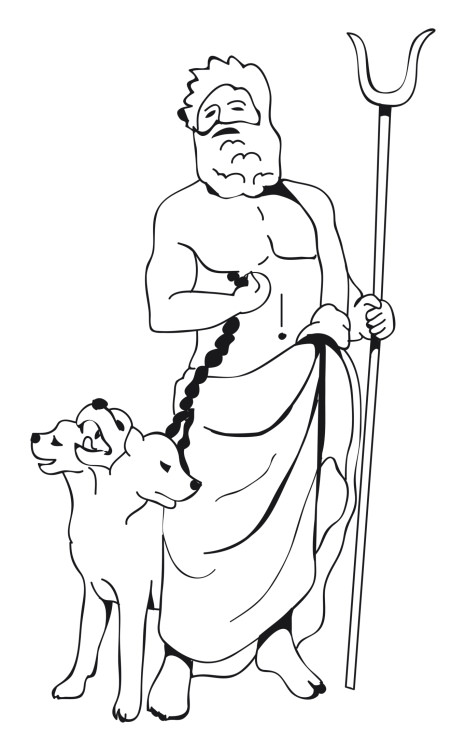 In Greek Mythology, Hades was the brother of Zeus and Poseidon and the god of the underworld. Fearing a prophecy stating that one of his sons would defeat him; Cronus swallowed all of his children except for Zeus. After Zeus freed his siblings from Cronus, the brothers Zeus, Poseidon, and Hades banded together to fight their father and strip the Titans of their power.

The Titans’ defeat caused the Olympian gods and goddesses to rule. It is interesting to note that both Poseidon and Hades were not considered Olympian gods. They were, however, very powerful and were given large domains over which to rule. Poseidon become Lord of the Seas and Hades ruled the underworld, or afterlife.

Hades Becomes God of the Underworld

Hades was the youngest son of Cronus and Rhea. As soon as Hades was born, Cronus swallowed him. It wasn’t until Zeus freed his siblings by causing Cronus to regurgitate that Hades’ real life began. After he was freed, he took over control of the underworld from Hecate, who was the Titan goddess of the underworld.

However, her role was slightly different than Hades’. She controlled the “crossroads” and both prevented people from entering the underworld and also prevented them from leaving. Hades was always portrayed as a powerful ruler rather than an overseer, as Hecate was.

Hades Falls in Love With Persephone

Besides being the god of the underworld, Hades is also well known for his control over Persephone. The moment he saw her, he decided he wanted to take her as his wife. However, she was initially unwilling.

Persephone was the child of Zeus, king of the gods, and Demeter, the goddess of the harvest. Though she was also a goddess, her days were spent playing in the fields. As a virgin, she is portrayed as innocent until Hades saw her in a field. Ultimately, his actions robbed her of her innocence and eventually led her on a path to becoming the Queen of the Underworld.

There is some debate as to whether or not Zeus actually consented to Hades marrying Persephone. Rather than agree to it, he simply decided not to prevent it. This, some believe, was a subtle act of defiance rather than an act of consent. Nevertheless, Hades and Persephone did get marred.

Once Persephone married him, she was unable to leave the underworld. As a result, Demeter, Persephone’s mother, suffered from a broken heart. This, in turn, affected the harvest. She was never told that Hades took her as his wife. For the year that Demeter wandered the earth searching for her, the earth became barren.

Zeus was forced to return Persephone to her mother, which caused the spring to return to the earth. Crops were able to grow once again. Though Persephone spent half of her life in the underworld, little is known about her time there. Many believe that she embraced her role as the Queen of the Underworld.

As God of the Underworld, Hades had a reputation for not only his temper, but also his stubborn nature. He was so obsessed with making Persephone his wife; he didn’t care about the consequences. Though he was powerful, he always felt as if he was in his brother Zeus’s shadow.