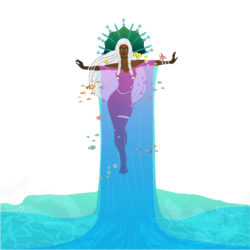 Ceto, also spelled Keto and translated as “sea monster,” is the daughter of Pontus and Gaia in Greek mythology. She is the primordial goddess of sea monsters and large sea creatures such as sharks and whales. Most notably, Ceto is known for bearing truly horrid creatures with her brother Phorcys. Here’s more information about this sea goddess:

Ceto Goes By Other Names

Ceto is also known in some Greek texts as Crataeis, which means “mighty,” and as Trienus, which means “within three years.” Some scholars blended her with the goddess of Hectate, whose nicknames are also Crataeis and Trienus.

However, don’t get her confused with the minor Oceanid of the same name: She is one of 3,000 sea nymphs born of Tethys and Oceanus. Additionally, the ancient Greek word for “sea monster” is “ketos”, which is how her name could have derived.

Greek mythology can be a little confusing when it comes to families. Below are short descriptions of Pontus, Gaia, Phorcys and Ceto’s children as listed in Hesiod’s work, Theogony. This list of children is the most consistent across sources.

Ceto Had Other Offspring

The author Homer notes Thoosa as the daughter of Phorcys, but doesn’t mention if Ceto is her mother. Thoosa is a sea nymph and the mother of Polyphemus, a cyclops, by Poseidon.

In “The Mark of Athena” by Rick Riordan, Ceto and Phorcys operate an aquarium that features exhibitions by sea monsters and mythological underwater creatures. Phorcys imprisons Frank Zhang and Percy Jackson, descendants of Poseidon. The satyr Coach Gleeson Hedge rescues them, kicking Ceto in the head. Angry about his, the sea goddess sends a Skolopendra to attack their ship. However, the Ichthyocentaurs had vowed to conquer Ceto and Phorcys, which defeated the Skolopendra.

As you can see, Ceto isn’t exactly the most well known of the Greek goddesses. However, is very much a part of Greek mythology.