Written by GreekBoston.com in Modern Greek History Comments Off on History of the Communist Party in Greece 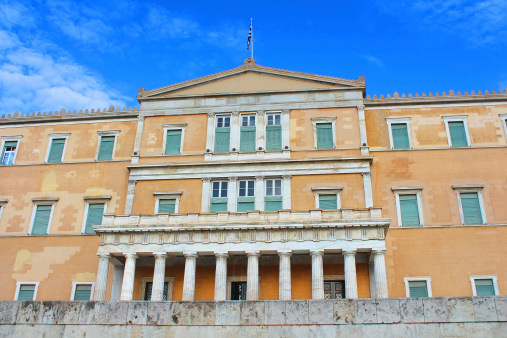 After the Greeks won their independence from the Ottoman Empire in the 1800’s, it took the people some time before they settled on a form of government. The country’s first attempt at democracy failed with the assassination of its leader, and as a result, the Great Powers created the Greek royalty. Somewhere in the middle of all this, the Communist Party of Greece, also referred to as the Socialist Labor Party of Greece or the KKE, was founded. Here’s more information about the history of the Greek communist party:

Formation of the Communist Party of Greece

The origins of the communist party in Greece can actually be traced to the Revolution of the Bolscheviks in Russia in 1917. Just one year after this revolution in 1918, the party was founded in Greece and in other places throughout the globe. Influenced by the teachings of Vladimir Lenin and Karl Max, this party was initially run by a committee that was made up of five members, including Nikos Dimitratos, D. Ligdopoulos, M. Sideris, A. Arvanitis and S. Kokkinos. The party was built on principals that had its roots nearly sixty years before its founding with organizations such as the Paris Commune and various anarchist groups throughout the world. When it was created, its headquarters were located in Athens, Greece.

Every since its founding, the Communist Party of Greece had a mixed reception. At various stages of its growth, it was either embraced or banned, depending on what was happening politically in Greece at the time. During World War II, Greece was morally and physically depleted and with the government in exile during Germany occupation, the political stability of the country further deteriorated. By the time Greece was liberated from German occupation at the conclusion of World War II, the people were disheartened. The Communist Party of Greece used this as an opportunity to gain momentum and the resulting Civil War left the country even more divided than it had been before the war.

At the conclusion of the Greek Civil War, it was clear that the Communist Party had lost. All of its members were either forced into exile or they went underground and fell from the public eye. After the Civil War, however, they still had an influence over the people in some capacity, particularly through the Communist Youth program, of which even the current Prime Minister (Alexis Tsipras) has been linked.

Although the party was forced to go underground after the Greek Civil War, it is still active today. In fact, it is one of the oldest political parities in Greece. They publish a daily newspaper and have even be linked to owning at least one Greek television station. They have said that their mission is to unify the communist party throughout the world. However, Greece is currently a democratic republic, leaving little chance for the party to have too much of an influence.