Written by GreekBoston.com in Greek Mythology Comments Off on About Erechtheus – Ancient Greek King 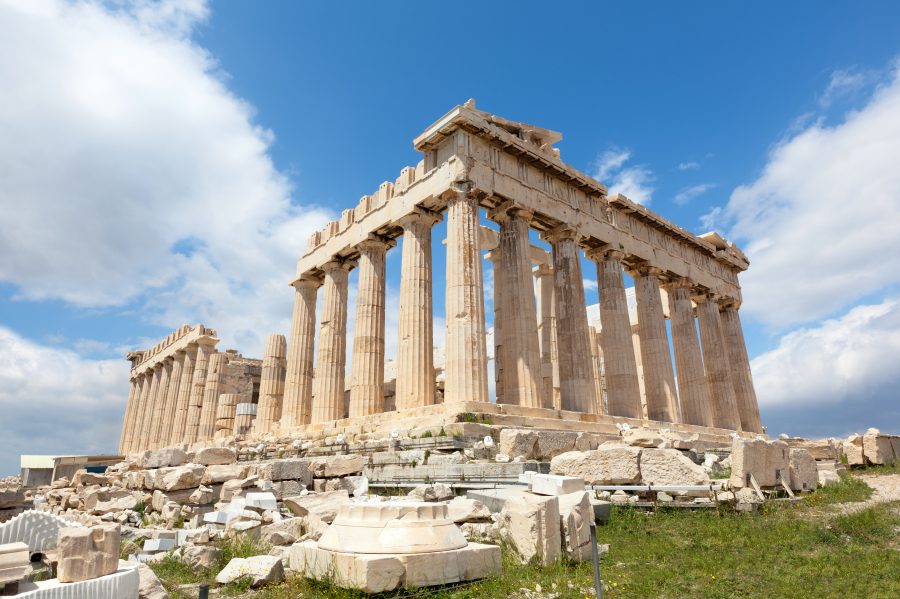 Erechtheus of Greek mythology was the founder and king of the city of Athens. Perhaps this is why Athenians are sometimes referred to in history as Erectheidai, “the sons of Erechtheus”. What is interesting is that he is someone who is not only part of some of the Greek myths and legends, but he also appeared to be a real king. Here is a look at who Erechtheus was, as well as some of the myths and stories that were associated with him:

The mythological Erechtheus is referenced in Homer’s Iliad as the “son of grain-giving Earth.” He is conceived when the god Hephaestus tries to rape the goddess Athena. During the struggle, Athena wipes his semen off her thigh with a piece of wool, which she throws to the ground. This causes Gaia, the Greek mythological conception of Mother Earth, to become pregnant. Erechtheus was raised by Athena.

According to Greek mythology, Poseidon and Athena competed for the patronage of the city of Athens. Poseidon struck the Acropolis with his trident, and a spring of water appeared, which became known as the Sea of Erechtheus. However, this spring was salt water, and therefore not useful to the citizens of Athens. Thus, Athena was given the patronage of Athens after giving the people the gift of the olive tree.

The historical Erechtheus was the son of King Pandion I of Athens and the grandson of Erichthonius. When Pandion died, the kingship was divided between Erechtheus and his twin brother Butes. Erechtheus maintained the physical ruling of Athens while Butes took charge of the priesthood devoted to Athena and Poseidon. Erechtheus and his wife Praxithea had six daughters, one of whom possibly married Butes according to some myths.

Throughout his reign as king, Erechtheus had to lead the Athenians in war against Eleusis, a city led by Eumolpus, son of Poseidon. Like many events in the ancient world, the war was dictated by an oracle. According to a prophecy, in order for Erechtheus to be victorious, one of his daughters must be sacrificed. The mythology concerning which daughter is unclear, but it appears that three of the daughters were married, pregnant, or had been abducted at this time, leaving Chthonia, Pandora, and Protogeneia to be sacrificed. Chthonia was possibly married to Butes, so this indicates that perhaps it was one of the other sisters who was killed. Regardless of which sister was initially sacrificed, some, or perhaps all, of the other sisters committed suicide following her death.

What is Fact or Fiction?

In the battle following the deaths of Erechtheus’ daughters, according to fragments of the tragedy Erechtheus by Euripides, Erechtheus kills Eumolpus, fulfilling the oracle which caused Erechtheus to sacrifice his daughter for victory. However, Poseidon avenges his son by using his trident to grind Erechtheus into the earth.Following Erechtheus’ death, Athena charges his widow with ensuring that the Erechtheum is built.

The temple was dedicated to Athena and to Poseidon, who became known as Poseidon-Erechtheus. Poseidon and Erechtheus were worshipped at the same altar by the same priest. The Erechtheum is the burial site of Erechtheus and his brother Butes. It is also believed that the remains of Poseidon’s and Athena’s contest for the patronage of Athens, the salt water spring and the olive tree, are located in or near the Erechtheum.