Written by GreekBoston.com in Greek Mythology Comments Off on Hecatoncheires – Creatures that Helped Zeus in the War of the Titans 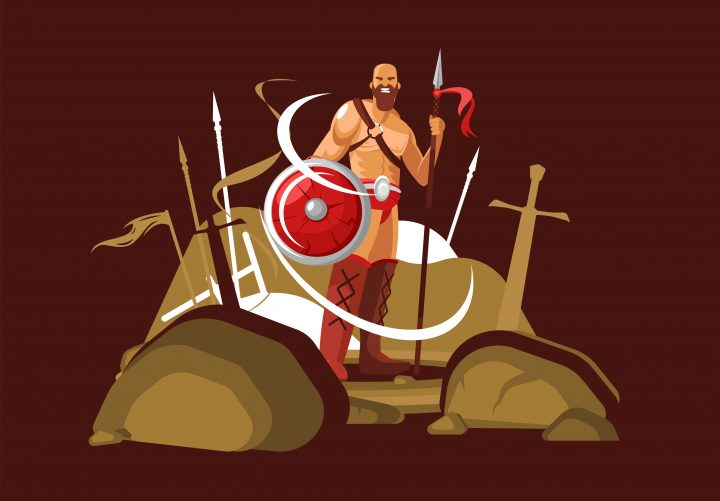 Zeus formed many allies on the road to war with his parents and their contemporaries, and the Hecatoncheires were one of them. Here’s more information about them:

The Hecatoncheires, or “hundred-handed one”, are a group of four mythological giants featured in ancient Greek folklore. Their names are Cottus, Gyges (sometimes known as Gyes), and Briareus (sometimes known as Aegaeon). Also known as the Centimanes, these giants were the offspring of Uranus and Gaia (Sky and Earth, respectively).

Cottus is a name that is common in the Balkan area of Eastern Europe, and may be connected to a particular goddess named Kotys thought to be an aspect of the Queen of the Underworld Persephone, whose forced abduction by Hades was thought to have created the four seasons.

Gyges, a possible reference to an ancient king named Ogygyes. Gyges is also the name of a Lydian king who founded the Mermnand dynasty in 7th century BC Anatolia. There is also a Gyges in Plato’s Republic, who finds a ring with powers of invisibility and uses it to overthrow and replace a king.

Aegeon, also sometimes used as a name for Poseidon, is, according to the Iliad, the name that mortals used to refer to Briareus. The root aly– is thought to refer to the sea, and there is thought to be a connection between the linguistic root and the Aegean Sea.

Role in the War of the Titans – Titanomachy

Uranus, at the time of the birth of the Hecatoncheires, was the ruler of the universe. Upon seeing his childrens’ fifty heads and hundred arms, he was disgusted and imprisoned them in a cave. After some time, Uranus’ son Cronus (or Saturn, as he is known in Roman mythology) castrated him and overthrew him. Cronus then ate all of his own children aside from Zeus (Jupiter), who was taken away in secret by his mother Rhea and raised in seclusion on an island.

Zeus returned upon maturation and released the Hecatoncheires, who Gaia had predicted would be pivotal in his victory. Cronus joined forces with the great mythological monsters the Titans and fought his son Zeus and the Hecantoncheires for control of the cosmos in what became known as the Titanomachy.

Aegeon seems to be the most discussed of the Hecatoncheires. His connection with the sea has been drawn by numerous scholars contemporary of Ancient Greece, including Homer. Virgil and Ovid describe Aegeon being not an ally of Zeus, but rather a traitor of his brother and an enemy of the gods, who fought alongside Cronus in the Titanomachy. He is described in various sources as being the son, the son-in-law, or the heir of Poseidon, or even being the sea god himself.