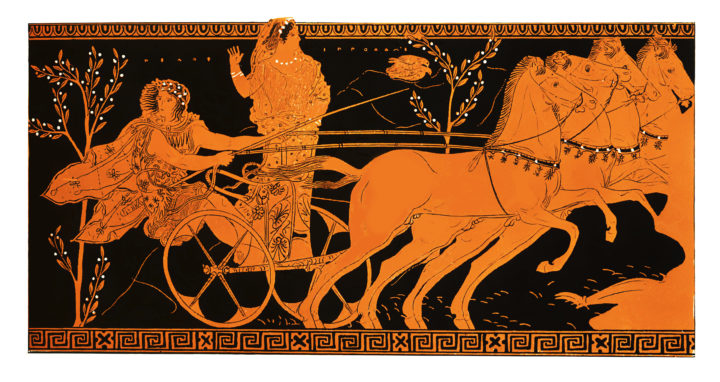 Tales of Pelops from Greek mythology tells the story of a man rising above his father’s betrayal and later succumbing to the consequences of his own betrayals. As is typical of Greek mythology, Pelops’ story involves tragedy, backstabbing, love, and violence. He was a minor figure in some of the Greek mythological stories. Here’s more information about who he was and his role in the myths:

Pelops was the son of Tantalus. Tantalus was the king of the city Sipylus, and he was unhappy with the gods of Mount Olympus. King Tantalus invited the gods for a feast. Instead of serving traditional Greek cuisine, he chopped up his son Pelops and served him as the main course. The goddess Demeter unwittingly consumed his left shoulder before the god Zeus became privy to this atrocity and enacted justice by having King Tantalus sent to Heides to be tormented for eternity.

Zeus then came to the Moraes for help. The Moraes were three goddesses who oversaw fate. Clotho spun the thread of fate, Lachesis measured the threads, and Asia cut the threads into their rightful length. This is a metaphorical way of saying they determined and executed the fate of every individual who lived. Zeus came to them and had them resurrect Pelops by reassembling his severed parts. However, his left shoulder could not be reassembled because it had been consumed by Demeter.

The god of the sea, Poseidon, took the young Pelop under his wing as his apprentice and lover. He taught Pelops to command the divine chariot which he eventually became a master of. Later on, Pelops grew to love Hippodamia, the daughter of King Oenomaus. Oenomaus was fearful of a prophesy that his son in law would eventually murder him. He took to hosting chariot races in which he would compete against men who were interested in his daughter. The goal was to murder all potential grooms of his daughter in order to prevent the prophesy from coming true.

Pelop set out to win one of these races and take Hippodamia’s hand in marriage. Before Pelops competed, he traveled to the sea to meet with Poseidon. He reminded him of their love for each other, and Poseidon granted him a chariot run by winged horses. The accounts surrounding the race itself are varied, but the most accepted version seems to be that Pelops convinced Oenomaus’s charioteer, Myrtilus, to tamper with his master’s chariot. Whatever happened, Pelops won the race resulting in the death of King Oenomaus and took Hippodamia’s hand in marriage. After winning the race, Pelops had Myrtilus killed, but before he died, he placed a curse on Pelops and his future descendants.

As a new king, Pelops went on to conquer much of the surrounding region. He neutralized his greatest rival, King Perseus, by having two of their children married. However, his reign came to an end. The curse bestowed upon them by Myrtilus resulted in the suicide of Hippodamia, the murder of his favorite son Chrysippus by his other two sons Atreus and Thyestes, and miserable lives for each of his descendants.

Greek mythology is filled with tragedies and the story of Pelops is no different. King Pelops is considered to be one of the most important founding kings within the Greek lore.