Written by GreekBoston.com in Greek Mythology Comments Off on Poseidon – God of the Sea 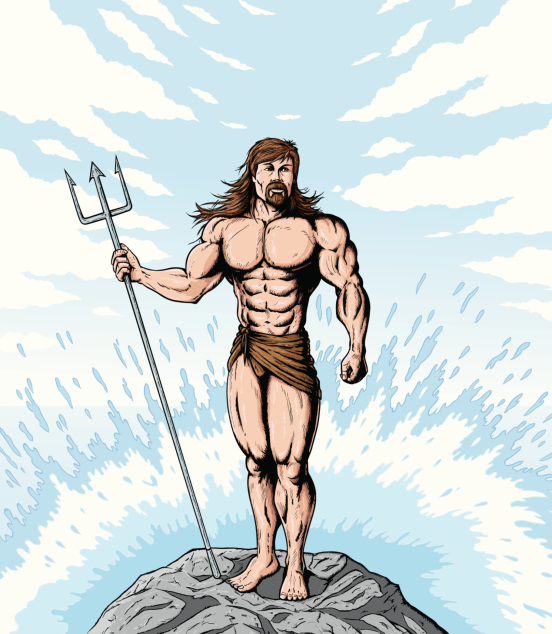 Poseidon, the Greek god of the sea, is one of the twelve Olympian gods and also Zeus’s brother. He is also known for causing earthquakes, calming horses, and for causing storms in general. His primary domain, however, is the sea. He is primarily depicted as an older man with long, curled hair and holding a trident.

Poseidon was the son of Cronus and Rhea, both Titans. Cronus lived in fear after a prophecy told him that one of his children would overthrow him. The prophecy, however, never told him which child that would be. Poseidon was born full-grown and after his birth, Cronus swallowed him.

In total, Cronus swallowed five of his children. Later on, it was Zeus who avoided getting swallowed, and who got the rest of his siblings out by giving his father something to make him vomit.

How Poseidon Got His Trident

After Cronus was forced to vomit his five children, Cronus was not happy. The siblings banded together and eventually overthrew him. As part of this fight, Cyclops gave the brothers Zeus, Hades, and Poseidon gifts designed to protect them from their father. To Zeus he gave the thunderbolt, Hades had an invisibility cloak, and Poseidon’s gift was the Trident. With the trident he was able to create water sources, earthquakes, and storms.

Poseidon wasn’t always portrayed favorably in mythology. On the one hand, he was seen as an honorable character that always kept his word. Conversely, he was often shown to be both violent and lustful. In addition to creating violent storms, he also raped many women. Not all of the women he slept with, however, were raped. He also had several children including Theseus, Triton, and Atlas. He also had a few male lovers.

It seems that Poseidon was worshiped in some form since the Bronze Age in Ancient Greece. He was also worshiped in several cities including Athens, Corinth, and many other cities in Ancient Greece. In Athens, however, he wasn’t the primary god that was worshiped. In a competition, Athena won the honor of being the main deity worshiped there. Poseidon, however, was still important. Poseidon also cared for the Oracle of Delphi before the role fell solely to Apollo.

Poseidon in Ancient Paintings and Sculptures

The Ancient Greeks depicted Poseidon fairly often in both sculpture and art. He was often portrayed as an older, well-muscled man with curly white hair. He wore a loose garment that only covered his bottom half and was rarely without his trident.

He was always portrayed as living in a palace that was on the sea directly on the ocean floor. His main form of transportation was by chariot, which was always pulled by horses that could ride on the surface of the ocean. He is portrayed in this way in both sculpture and paintings and frescoes.

Poseidon is one of the more powerful Olympian gods and is often in competition with Zeus. Because of this, his relationship with his siblings is often strained. Overall, he is one of the most well known of the Greek gods.