Written by GreekBoston.com in Ancient Greek History Comments Off on What to Know About Constantine the Great 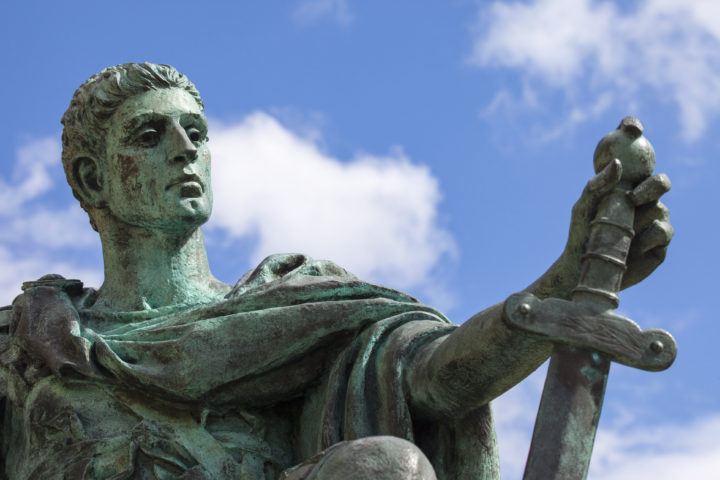 Constantine the Great ruled as emperor of various parts of the Roman Empire from 306 until his death in 337. While he occupies a substantial place in history, it is difficult to evaluate him objectively due to the subjective nature of the surviving sources about him. These sources tend to either unequivocally celebrate his virtues or likewise criticize him. Similarly, some sources emphasize his moral and religious legacy while others focus on his secular and military significance. He is known for being the first Christian emperor and also during this time, Greece was part of the Roman Empire. Here’s more information:

Constantine was born in 277, and, during his formative years, the Roman Empire had become a tetrarchy. Although it was still one empire, there were separate Augustus (senior) emperors in its western and eastern regions. Under each Augustus Emperor was a Caesar (junior) Emperor who presided over a subdivision of each region.

The son of Constantius, the Caesar in the West, Constantine spent much of his time during his father’s reign in the court of Diocletian, the Augustus of the East. He was likely exposed to Christians before Diocletian instituted a widespread persecution of them. As Diocletian’s health failed and led to his resignation, the political fallout left Constantius passed over for promotion to Augustus and replaced as Caesar. However, upon his death, Constantine’s popularity with the military enabled him to force his own ascension to Caesar.

Through the ebbs and flows of political and military conflict, Constantine emerged as the sole emperor of the entire Roman Empire by 325. Early in his reign as Caesar, he practiced religious tolerance, apparently because he deemed it pragmatic to do so. In 313, he enacted the Edict of Milan, which officially granted tolerance to Christianity and all religions.

Although he was not baptized as a Christian until he was near death, he used Christian symbols and invoked Christian inspiration during the civil wars that expanded his power. Whether out of sincere belief or political expedience, he broadly supported the Christian Church and even intervened in its doctrinal disputes. This was most evident in 325 when he convened the Council of Nicea, which produced the Nicene Creed familiar to liturgical Christians to this day.

As he dealt with inflation that resulted from excessive minting to supply government funds, Constantine converted Rome to a version of the gold standard. He also reorganized the Senate. Not wary of violence, he had his wife and eldest son executed, allegedly due to an immoral relationship.

Constantine was not only able to reunite the Roman Empire in his day, but he won a number of other impressive victories. He was lauded in his day for his perceived virtue and was later held up as a model of leadership. However, as sources critical of him have gained prominence, this legacy is disputed.

The contested Donation of Constantine was alleged to have given the Pope political authority over Rome and its vicinity. However, it was later shown to be a forgery. The authenticity of Constantine’s faith is likewise a point of contention, with some sources viewing him as a Christian visionary and others holding him to have exploited Christians and others for his own purposes.