Why Did Bronze Age Greece Collapse?

Written by GreekBoston.com in Ancient Greek History Comments Off on Why Did Bronze Age Greece Collapse? 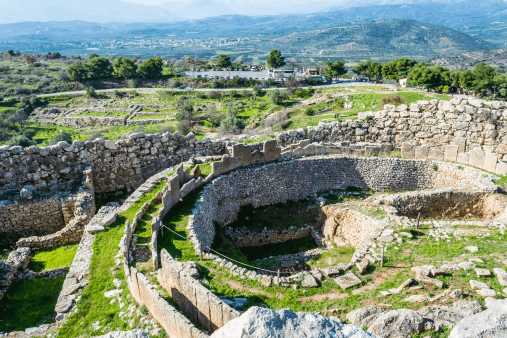 It is true that Ancient Greece is known for its innovation and rich history. However, it wasn’t always this way. One of the most interesting and mysterious of such collapses came at the onset of the Greek Dark Age in what historians refer to as the Late Bronze Age collapse. In this catastrophic event between 1200 B.C. and 1150 B.C., multiple civilizations in the Mediterranean and Aegean collapsed seemingly overnight. In this article, we’ll examine Greece’s Late Bronze Age collapse, analyzing why it happened and how it came to change Greek history.

Fall of the Mycenaeans

Beginning in 1600 B.C., Mycenae was the cultural and economic center of Greece. By far the most well-known attribute of Mycenaean Greece was the palatial system, which saw palaces as the heart of economic life in the state. By around 1200 B.C., Mycenae began to collapse before disappearing entirely at around 1050 B.C. Among the key features of the collapse of the Mycenaean civilization were widespread depopulation, destruction and desertion of palaces, and the disappearance of Linear B, the official writing system of the civilization. While Mycenae is by far the most recognized abandoned settlement of the age, archaeologists have found other communities that were deserted from the time, including Knossos, Thebes, and Pylos.

Causes of the Collapse

Historians disagree on the exact cause of the Late Bronze Age collapse. Many historians suggest that the root of the fall of many of these civilizations was environmental. These scholars point out evidence of an earthquake at the Mycenae site that could have destroyed the civilization. Others suggest that droughts could have radically altered the economic life of Mycenaean Greece, encouraging rapid depopulation of palace sites.

Other scholars suggest that warfare preceded the Late Bronze Age collapse of Greece. In making these arguments, scholars point out Egyptian and Hittite accounts of an alliance of tribes known as the Sea People, who invaded and destroyed many civilizations in the Mediterranean and Aegean at the time Mycenaean Greece collapsed. Historians who believe that the Sea People attacked and destroyed Greece point to fire damage to ruins from the time as evidence of a largescale invasion.

The major consequence of the fall of Mycenaean Greece and the Late Bronze Age collapse was the start of the Greek Dark Ages. Lasting for about 300 years from 1100 B.C. to 800 B.C., the Greek Dark Ages was an era characterized by stagnant population growth, the simplification of pottery, and the discontinued use of the Linear B alphabet. Additionally, large settlements no longer existed in Dark Age Greece. Rather, smaller settlements centered around the oikos, or household, were normal in Dark Age Greece. In terms of economic life, trade links with foreign nations were further severed for the most part in Dark Age Greece.

The Late Bronze Age collapse greatly changed Greece. In addition to destroying the once powerful Mycenaean civilization, the collapse brought about the Greek Dark Ages. While these changes were highly detrimental for those living in ancient Greece, they were necessary steps on the nation’s road to the Archaic Age and some of the most exciting events in Greek history.