Home > Greek Culture > Greek Mythology > How Did Zeus Become King of the Gods? 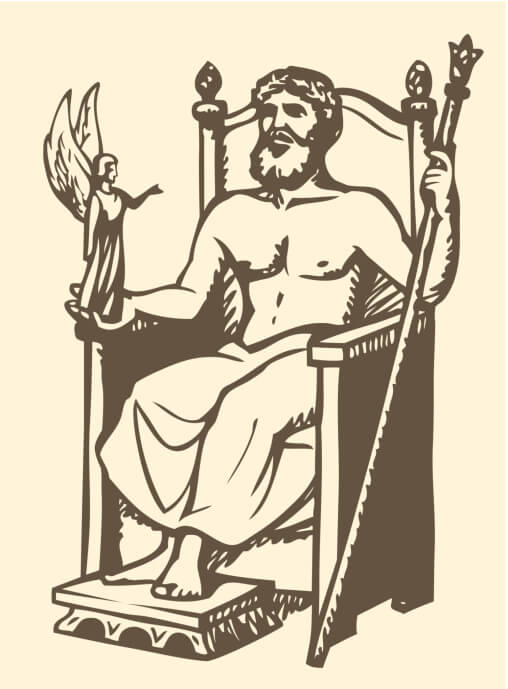 Zeus is the Olympian god of the sky. He is said to control the weather and also represent law and order. He was depicted most often with a dark beard, long cloak, and is never far from his lightening bolts. He fathered many children, and also has a bit of a temper. However, he is most known for being the king of the Olympian gods.

Well, it all started with a prophecy. Gaia told Cronus that it was his fate to be overthrown by his sons, just as he had overthrown his own father. Eventually, it was the actions brought on by this that led Zeus to become king.

Zeus was the son of the Titans, Cronus and Rhea. Cronus, at the time, was king – a title he usurped from his father, Uranus. Cronus was told that one of his children would overthrow him. As a result, he swallowed each of his children whole to prevent them from taking his throne.

To prevent this from happening to Zeus, Rhea enlisted the help of Gaia. Rhea was tired of watching her own children be swallowed by her husband. So, she tricked Cronus by giving him a rock wrapped in swaddling clothes, which he then swallowed.

Once he left Crete, Zeus knew that he had to confront Cronus and rescue his siblings. Zeus tricked Cronus by giving him an emetic, which causes vomiting. When Cronus vomited, he expelled all of his swallowed children. In some versions of the story, Gaia is the one who caused Cronus to regurgitate the children.

After they were freed, Poseidon and Hades banded together with their brother, Zeus, to overthrow Cronus. Thus, the prophecy was fulfilled because his own sons took down Cronus.

Who will become king?

After Cronus was defeated, Poseidon, Hades, and Zeus bickered over who would become the next king. Rather than fight violently, they decided to draw lots over who would have the honor. Because of the draw, Zeus became the king, Poseidon ruled over the seas, and Hades ruled the underworld.

Despite the fact that Zeus won the draw, many believe that he was destined to be king anyway because he was considered to be the most powerful. Nevertheless, he went on to rule as king of the Olympian gods. It all began with a simple prophecy that stated that his sons would overthrow Cronus.