Written by GreekBoston.com in Greek Mythology Comments Off on Zeus – King of the Gods 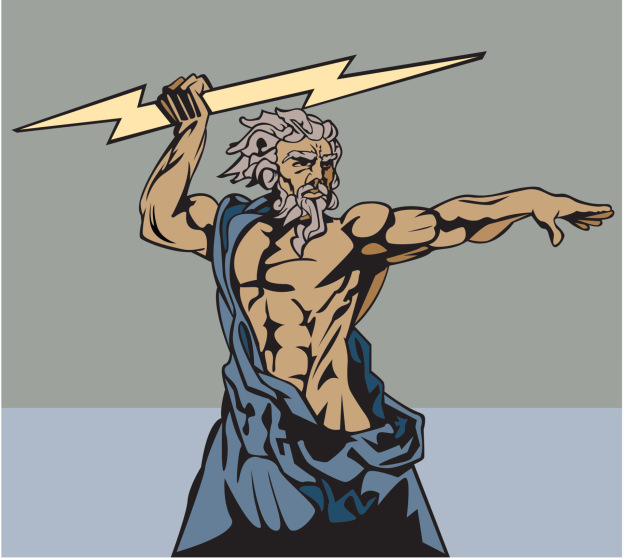 Ancient Greece was polytheistic, meaning that the people worshiped multiple gods and goddesses. Each god or goddess watched over something. For example, Athena was the goddess of wisdom. However, Zeus, the son of Cronus, was the one who ruled over all of the Olympian gods.

Like all gods and goddesses, Zeus had a specific purpose. He ruled over the sky and was considered the rain god. He was often depicted as having control over lightening and using it as a weapon.

According to the legends, Gaia warned Cronus, Zeus’s father, and Uranus that one of his sons would defeat him. Because of this, Cronus would swallow his male offspring directly after birth.

Rhea, Zeus’s mother, wanted to prevent this from happening to yet another child so she sought Gaia ‘Gaia took Rhea away to the island of Crete where she gave birth to Zeus. Cronus was given a rock wrapped cloth as a decoy and as a result, Zeus lived. According to one version of this story, he was actually raised by Gaia.

How did Zeus become ruler of the gods?

According to the legends, Zeus eventually overthrew his father who, at the time, was the ruler of the Olympian gods and goddesses. Zeus and his two brothers, Poseidon and Hades, then began to bicker over who would be the king. They ended up solving their dispute by drawing lots with Zeus being the victor.

Zeus was married to the goddess Hera who is also his sister. The stories often depict him as having several affairs, some of which resulted in children. Hercules, for example, was the child of one of Zeus’s conquests. Each time Hera found out about his affairs she would become very jealous and punish the woman in some way.

What exactly was he the god of?

Who are Zeus’s children?

A lot of the stories involving Zeus show him having affairs with both goddesses and mortal women. Both these affairs and his marital relationship with Hera resulted in various offspring. They include Hercules, Apollo, Dionysus, Hermes, Artemis, and Perseus. Although, some literature places Perseus as Poseidon’s son. So, he was not only a ruler, but also a prolific father.

It is interesting that the gods and goddesses of Greek mythology have a lot of human characteristics. For example, Zeus and Hera were married and had children. Zeus also had multiple affairs, allowing him to father more children. Not only that, but the stories depict him as experiencing emotions such as anger and displeasure. So, even though Zeus was a god it was his human characteristics that helped relate him to the people of Ancient Greece.