The History of Icons in the Greek Orthodox Church 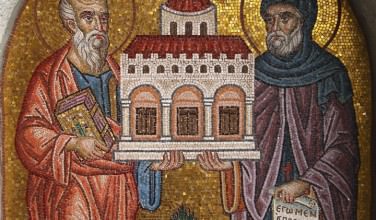 Though commonplace in Orthodox Churches, these tools have an interesting history and an interesting interpretation from outside of the Church. So first, let’s define icons. They are painted images (and reproductions of these images) typically of biblical scenes, the life of Jesus Christ, historical events of the Church, and portraits of saints. Icon comes from Greek meaning image.

The first image of Christ that was produced was not painted and it actually touched Jesus. As the story goes, during the time of Christ, the ruler of Edessa, Abgar, had leprosy and desired healing. He had heard of the many healings and stories of Jesus and sent his painter, Ananias, to go and paint Christ. After trying to paint from a distance, due to the crowds that surrounded Jesus, Ananias was called by Jesus to approach Him. Jesus then asked for water and towel and wiped His face clean with the towel and His image was preserved on the towel. This towel then returned to Abgar and healed him, later Thaddeus, one of the 70 Apostles went and taught Abgar the faith and had Abgar baptized.

The first icon created by human hand was an icon of the Virgin Mary holding Christ; this particular version is called the Directress. St. Luke created this icon the Evangelist, the same person who according to tradition, wrote the Gospel of Luke. This started a long tradition of hand-written (written is used based off of the Greek eikonographia, iconography, “image writing”) up unto the present day. During the years 730-787AD and again from 813-843AD there were two periods of Iconoclasm in the Byzantine Empire (for a lack of better words, the Church’s Empire). Iconoclasm was the destruction and rejection of icons as proper tools of the Church. Though eventually ended, Iconoclasm helps us understand what we believe about icons. One of the biggest concerns was that it was not proper to show God as an image, but this was overturned by the understanding of the Doctrine of Incarnation, which tells us that Christ actually took on flesh and was as human as every human, hence we can depict him physically and the saints. This was affirmed by the Second Council of Nicea in 787AD, the 7th Ecumenical Council. Once reestablished and then reestablished again in 843AD, Iconography really began to flourish, even more so than before, and out of this deep admiration for Icons, the Icon Screen or Ikonostasion began to be formed. (Yes, there was a time in our Church that the Altar was not seen as a sort-of separate closed off room, but rather a guarded area within the church.)

Though our Christian brethren, and others of why we have icons and kiss them question us, we have answers. One of the greatest defenders of icons during the period of Iconoclasm was St. John of Damascus, and he provides us our answer, “I do not worship creation over the Creator.” We do not worship icons, but rather we venerate them, a way to show great respect and love for the holy. 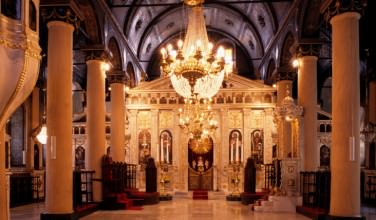 What is the Greek Orthodox Memorial Service?