Home > Greek Orthodox Religious Information > What is the Significance of Greek Religious Icons?

Written by GreekBoston.com in Greek Orthodox Religious Information Comments Off on What is the Significance of Greek Religious Icons?

When you first walk into an Orthodox Church, one of the first things you may notice are the images. Icons are usually set up next to the candles in the church right as you walk in. For those who are practicing Orthodox Christians, you may know that the routine is to light a candle, stand in front of each of the icons, do your cross, and then kiss each one. Icons are also placed in other locations throughout the church, such as in the front of the church where the priest stands.

As you can see, icons do have an important place in the Orthodox Church, but what is the significance of them exactly? Here’s more information:

Iconography has been a part of the Orthodox Christian tradition since the early days of Christianity. It has been said that the Apostle Luke was the first official iconographer. In fact, he is often referred to as the Father of Iconography. It is thought that he started painting these icons, mostly of the Theotokos (three of them), shortly after Saint Paul was martyred. He also painted images of Saint Paul and Saint Peter. In addition to painting these images, he spent a fair amount of time preaching. He was eventually martyred when he was in his 80’s.

Purpose and History of Icons

Icons are considered to be an integral part of the Orthodox Christian Church. Not only do they serve to remind us of the people and stories of the Bible, but they are also used in prayer. However, they weren’t always as accepted as they are now. During the days of an event known as the Iconoclast Controversy, which took place first from 730 – 787 AD and then again from 813 -843 AD, icons were banned and even burned because there were those who felt that using them was against Christianity. It was the Empress Theodora who eventually restored the use of icons on the Orthodox Church in 843 AD. This is known as the Triumph of Orthodoxy, and she is often referred to as Theodora the Iconodule or the Righteous Theodora.

Today, Orthodox Christians go through a practice referred to as venerating the icons. This is considered to be a part of church etiquette, especially for those icons that are located by the candles in the Narthex or at the beginning of the Nave. When standing in front of the icon, you simply make the sign of the cross and kiss a place on the icon. If the icon is of Jesus Christ or someone else, such as the Theotokos, you make sure that you don’t kiss the face. If there is a hand, your goal is to aim for that! If it is an event, you can kiss anywhere on the image.

Icons are considered to be windows into heaven and are simply representative of the people or events that they depict. It is a good idea to pay them the proper respect when you walk into the church! 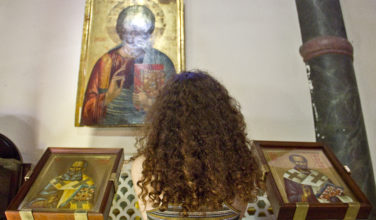