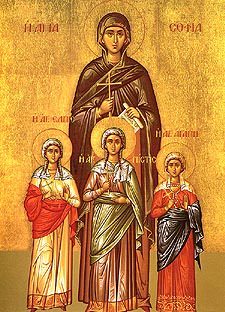 Learning about the lives of the saints is an important thing for Orthodox Christians. Not only do they serve as examples of what it really means to be a Christian, but their lives can be sources of inspiration for us all. This is so important to the Church that people are regularly named after the saints. Those who are celebrate their name day each year, which is held on the saint’s feast day.

Saint Sophia, who is also referred to as Sophia the Martyr, was alive during the early days of the Christian Church. It is unknown of when exactly she was born, but we do know that she resided in the region that we know as Italy today. She is mostly associated with her three daughters and the fact that she was a widow.

Her daughters are an especially important part of her story. She was a strong Christian and when her children were born, she named them after the three virtues that are mentioned in the Bible – Faith, Hope, and Love. They were all alive during a time when the Emperor Hadrian regularly tortured Christians in order to prevent the spread of Christianity in the Roman Empire. Despite this, her whole family were Christians.

Knowing that they were to be brought to the emperor, they prayed to Jesus Christ for strength. When the time for them to appear to Hadrian, those witnessing it would later remark as to how composed they looked. Hadrian told them to denounce their religion during this meeting, and all four of them stayed true to their beliefs.

He tried to get each of the girls to make a sacrifice to Artemis, one of their pagan goddesses. The girls each refused. As a result of this, all three of the girls were tortured in gruesome ways. Hadrian’s hope is that this would then persuade Sophia to turn her back on Christ. She didn’t. She took her daughters’ bodies, buried them, and stayed by their graves until she perished. All four of them are considered to be martyrs.

Saint Sophia’s name day is on September 17th of each year. Check the Name Day page for more information about other Orthodox Christian name days.