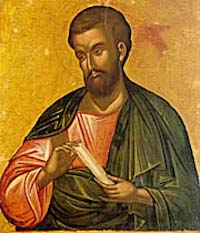 Saint Bartholomew, also known as the Apostle Bartholomew, was one of the Twelve Great Apostles and one of the original followers of Christ. He is mentioned in the New Testament in the Gospels as well as the Book of Acts. He actually has two feast days – one on June 11th and another on August 25th. Those who are named after this saint often celebrate both of these days.. Here’s more information about the life of this saint:

The exact birth date of the Apostle Bartholomew is unknown, but it is well understood that he was born sometime in the first century A.D. Since he was mentioned in the New Testament, we also know that he was alive at the same time Jesus was and that he was present for many of the key moments in the Bible and of Jesus’s life. He was born in a place called Cana, which was in Judaea in the Roman Empire.

Bartholomew was eventually martyred in Armenia while he was preaching. At some point before he lost his life, he was crucified hanging upside down by the legs. He was removed from the cross while he was still alive. He and Philip were both crucified at the same time because they caused the death of a serpent that the people of Hieropolis worshipped. Philip died while being crucified, but after an earthquake, Bartholomew was removed from the cross. He was able to move on to India and then Armenia. He eventually lost his life in Armenia.

Saint Bartholomew is mentioned, along with Barnabas, in some of the hymns in the Orthodox Christian church service.

Holy Apostles Bartholomew and Barnabas,
entreat the merciful God
to grant our souls forgiveness of transgressions.

You have appeared to the universe as a great sun,
shining with the radiance of your teachings and awesome miracles.
You enlighten those who honor you, apostle of the Lord, Bartholomew.

Saint Bartholomew has two feast days – one on June 11th with Saint Barnabas and one on August 25th. Visit the Name Day page for more information about other Orthodox Christian name days.