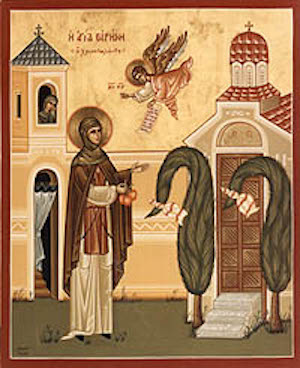 Irene Chrysovalantou is one of those saints who was alive several hundred years after the early days. She definitely made a positive impact on Christianity. Her feast day is on July 28th of each year. Here’s more information about her:

Irene was originally born in Cappadocia. Her family was wealthy and aristocratic and this is how she came to be engaged to the emperor. Irene’s sister married Vardas, the brother of the Empress Theodora, who brought icons back into the Orthodox Christian Church.

On a journey to Constantinople, Irene asked to speak to a recluse named Ioannikos. He had a vision that foresaw how important Irene would be to the church. He said, “Welcome Irene, Servant of God. Proceed to the Imperial City in joy because the convent of Chrysovalantou needs you in the community.” Irene ultimately decided to heed this vision and she devoted her life to the monastery.

After performing many miracles and living a life in prayer serving the Lord, Saint Irene passed away

Saint Irene Chrysovalantou’s feast day is held on July 28th of each year. Here are the hymns that are sung on this day after they had been translated into English.

Apolytikion in the Plagal of Tone One (Tone 5)

modeled on ‘Ton Synarnarhon Logon (Co-eternal with the Father)’

Not a temporal kingdom on earth didst thou obtain,
but Christ, thy most comely Bridegroom, vouchsafed thee heavenly crowns,
and thou reignest as a queen with Him eternally;
for thou didst dedicate thyself unto Him with all thy soul,
O Irene, our righteous Mother,
thou boast of Chrysovalantou, and mighty help of all the Orthodox.

Leaving all the world behind with its impermanent glory,
thou wast wedded unto Christ, the King immortal and holy,
bringing Him as precious dowry thy maiden beauty
and thy trophies won through abstinence over demons.
O Irene, our righteous Mother, entreat thy Bridegroom to show His mercy to us.