The saints are an important part of the Orthodox Church’s annual calendar, and each saint has his or her own feast day. Those who are named after the saints will celebrate their name days on this day. Saint Lucian is one of the many saints that people could be named after, and it is absolutely worth learning about his life. He is considered to be one of the martyrs of the church. His name day is on October 15th. Here’s more information about him:

Saint Lucian, also known as Lucian the Martyr of Antioch, was alive within the first few hundred years of the Orthodox Church. During this time, the new Christians were regularly persecuted by the pagans. He was born in Samasota into the Christian faith because both of his parents were Christians. He was taught the ways of the faith at a very early age and went to  a catechetical school, which was located in Antioch. Here, he was taught the proper ways of the faith and this teaching eventually influenced the work he did for Christianity.

One of the things that he accomplished is that he realized the scripture was difficult for a lot of people to read. He edited the Old Testament that was translated into Hebrew in order to make it more understandable to people. He managed to do so without dragging the politics of the day into the document. He published his translation and those who read the copy, even now, remark at how well written and understandable it is, and that it is free from politics.

He also did some work to spread the faith. He traveled to Nocomedia in order to gain Christian converts. Eventually, his work led him to become a martyr. He was arrested after defending the Christian faith where he lost his life due to extreme hunger and thirst.

Saint Lucian’s feast day is on October 15th of each year. There are some special hymns that are either sung or chanted during this day. Here they are:

We all gloriously acclaim thee with hymns, O Lucian, thou most brilliant luminary, who wast first illustrious in asceticism and then shonest forth in contest: Intercede unceasingly for us all.

Lucian the Martyr of Antioch – Also Source for Image 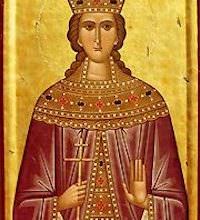