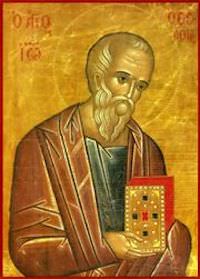 St. John was one of the original Twelve Disciples of Jesus Christ, one of the Four Apostles and was also the established author of several books in the New Testament. Although the other three gospels in the New Testament were credited to the other three apostles (Matthew, Mark and Luke), the authorship of those books is somewhat under debate. He is thought to be the only of the Twelve Disciples who died of natural causes. Saint John’s authorship has been well established. His name day is celebrated on May 8th of each year. Here’s more information about Saint John, also known as the Apostle John:

Saint John is said to have been the youngest of all the apostles. Born in A.D. 6, he was younger than Jesus Christ himself and is thought to have been born roughly six years after Christ was born. He was born in Bethsaida, Galilea, which at the time was part of the Holy Roman Empire. His parent’s names were Zebedee and Salome and he was brothers with James, a man who was also one of the Twelve Disciples. Other than this, the exact details of his early years aren’t well known.

It is well documented that John, along with his brother James, was a disciple of Christ. Furthermore, he is also one of the Four Apostles and is credited with writing the Book of John, or the Gospel of John, in the New Testament. He is also credited with other books, such as II John, III John, and also the Book of Revelations. The story behind when he wrote the Book of Revelations is well documented. Banished to the Greek island of Patmos under exile, he wrote Revelations in a cave on the island where he lived. Locals refer to that cave as the Cave of the Apocalypse and today, there is a small church on the site. The larger Monastery of Saint John hovers above it but the original cave is still there. Later in life, he became the Bishop of Ephesus and he lived the rest of his days here until he died when he was in his 90’s.

It is well established that Saint John lived to an advanced age and died in Ephesus in 98 or 100 A.D. In other words, he lived well into his 90’s and is thought to have been 93 or 94 when he passed away. Unlike many of the other saints and the three other apostles, there is no evidence that he was martyred. In fact, the Orthodox Christian Church has kept meticulous records and they maintain that Saint John died of natural causes, whereas ten of the disciples were martyred, and the remaining, Judas Iscariot, died by suicide.

Saint John’s name day is celebrated on May 8th. Visit the Name Day page for more information about other Orthodox Christian name days.

OrthodoxWiki – Apostle John (Source for Photo Credit for Image Above)