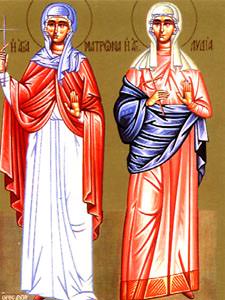 Saint Matrona is one of those saints who sacrificed herself for her beliefs. Her feast day is on March 27th of each year. Here’s more information about her:

Not much is known about Saint Matrona’s early life. We do know that she was alive somewhere in the 3rd or 4th century and that she lived in Thessalonica. Not much is known about her life except that she was a servant or a slave for a Jewish woman named Pautilla, who was the wife of a top military commander. Pautilla and her husband were well known for their Jewish beliefs, and they expected that their servants, Matrona included, would also be Jewish.

Matrona, however, was a devout Christian and it was her beliefs that eventually got her into trouble with Pautilla. When Pautilla found out that Matrona had been to church, she originally asked her, “Why won’t you come to our synagogue, instead of attending the Christian church?”

Matrona answered Pautilla by saying, “Because God is present in the Christian church, but He has departed from the Jewish synagogue.” Pautilla raged at her, beat her, tied her and eventually left her in a dark closet. When she returned to the closet, she found that Matrona’s ties had been released. She raged again, beat Matrona even harder, tied her up even tighter, and made sure that the dark closet was definitely locked. When she came to the door, Matrona was freely standing and praying. Matrona was eventually flogged and then finally lost her life. The Bishop Alexander of Thessalonica eventually built a church to honor Matrona and the sacrifice she made for her faith.

Saint Matrona’s feast day is held on March 27th of each year. When we celebrate her feast day, this hymn is usually sung:

O Lord Jesus, unto You Your lamb cries with a great voice, “O my Bridegroom, You I love; and seeking You, I now contest, and with Your baptism I am crucified and buried. I suffer for Your sake, that I may reign with You; for Your sake I die, that I may live in you. Accept me, offered out of longing to You as a spotless sacrifice.” Lord, save our souls through her intercessions, since You are great in mercy.

Saint Matrona’s feast day is on March 27th of each year.  Check the Name Day page for more information about other Orthodox Christian name days.