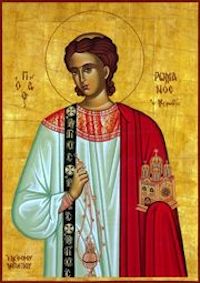 Saint Romanos is one of the saints in the Orthodox Church that we remember each year. His feast day is on October 1st. Here’s more information about him:

Although a large number of the saints were alive early on in the history of the Orthodox Christian Church, there were some that come later. Saint Romanos, also known as Romanos the Melodist, is one of these. He was alive while Anastasius was the Byzantine Emperor, which was from 491 to 518 AD.

A hymn written in his honor, he is described of being, “of Hebrew stock.” This is to describe that he had Jewish parents, but he was actually baptized as an Orthodox Christian. He was from Emesa, which was in Syria. After he was baptized, he became a deacon of the Church of Beirut.

One of the things he was most known for was his involvement with composing church music. He is credited as being the first composer of the church music known as the kontakia, which are sung or chanted during the Divine Liturgy. He composed them for various purposes, such as celebrating the saints and various feast days. He took his inspiration by studying the works of Saint Ephraim.

Saint Romanos’s feast day is on October 1st of each year. Here are the hymns that are sung or chanted on both of these days:

Apolytikion of Romanos the Melodist – Plagal of the Fourth Tone

The image of God, was faithfully preserved in you, O Father. For you took up the Cross and followed Christ. By Your actions you taught us to look beyond the flesh for it passes, rather to be concerned about the soul which is immortal. Wherefore, O Holy Romanos, your soul rejoices with the angels.

Kontakion of Romanos the Melodist – Plagal of the Fourth Tone

As a harmonious harp of lofty wisdom from on high and an expounder of things seen in God-inspired ascents, we extol thee, Father Romanos, and we hymn thee. As a trumpet of the gifts that pass the mind of man, do thou rouse us to divine and saving watchfulness, as we cry to thee: Rejoice, O Father elect of God. 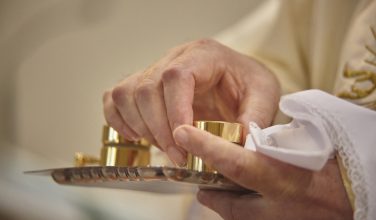 Learn About Chrismation in the Greek Church