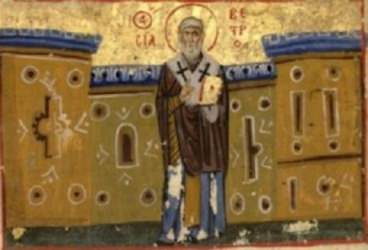 There’s no doubt that the lives of the saints are important to Orthodox Christians. Learning about these saints is part of their daily lives. Through the saints, Greek Christians can learn about the early days of the church. The saints also serve as examples as to how people should live their lives. Saint Sylvester, whose feast day takes place every year on January 2nd, is one of these saints. Here’s more information about him:

Saint Sylvester, also known as Sylvester I of Rome and Our Father Among the Saints Sylvester I, is one of the saints of the early church. We don’t know that much about his life, including the year of his birth. However, we do know that he was born in Rome and that he was raised by his mother. As he grew older, he received an education from Quirinus, who was a priest of the early church.

As a result of this, he learned a lot about Christianity and was raised to be a believer. Not only that, but he was known for his altruistic nature and as he grew as a person and developed in his faith, he regularly offered kindness to strangers. He constantly welcomed people, even strangers, into his home. The Bishop Timothy of Antioch also lived in his home for a year.

When Sylvester was thirty years old, he became a deacon. Shortly after that, he became a priest. He became the Pope in Rome in 314 after he succeeding Saint Miltiades. He wasn’t present during the First Ecumenical Council and instead sent delegates. He passed away in 325, which is the same year that the council took place.

There are some hymns that can be found in the Orthodox Christian church service that celebrate Saint Sylvester. The hymns are usually sung on his feast day on January 2nd. Here are the details:

A model of faith and the image of gentleness, the example of your life has shown you forth to your sheep-fold to be a master of temperance. You obtained thus through being lowly, gifts from on high, and riches through poverty. Sylvester, our father and priest of priests, intercede with Christ our God that He may save our souls.

As a companion of the holy ascetics, thou O God-bearer, hast been worthily shown forth as a true priest of priests before our King and God. Wherefore, thou rejoicest now with the choirs of the Angels, filled with gladness and delight in the Heavens, O Father. Renowned Sylvester, famed shepherd of Rome, save them that honour with love thy memorial.