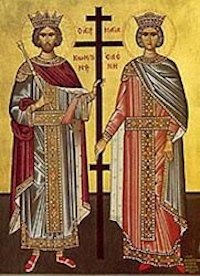 Learning about the saints is an important part of being an Orthodox Christian and each saint is regularly celebrated throughout the year as part of the church calendar. Each saint has his or her own feast day, and those who are named after the saints will celebrate their name day on the saints’ feast days.

Saints Constantine and Helen are two of those saints and they share a feast day. They are celebrated on May 21st of each year. Here’s more information about these two saints:

About Saints Constantine and Helen

Referred to as a “sovereign to the Christians” Emperor Constantine was known for his beliefs. He was the son of Constantius Chlorus, a ruler of a portion of the Roman Empire, and Helen, the Empress who was also a Christian alongside her son. Constantine was born 272 and he became Emperor when his father died in 306. In 312, he learned that his opponent, Maxentius, began marching to Italy. Shortly after that, Jesus Christ appeared to him in a dream and told Constantine about the cross and its significance. After the dream, he ordered that his victory banner be inscribed with the Holy Cross and and the Name of Jesus Christ. On October 28, he officially marched and entered battle against Maxentius and won. He rode to Rome waving his victory banner proudly and was declared to rule Rome West, while his brother-in-law, Licinius, was to rule Rome East. Under Constantine’s rule, Christianity really took root. In 325 he organized the First Council of Nicaea and he addressed the assembly personally.

Helen’s story with Christianity really begins after Constantine emerged victorious from the battle against Maxentius. During this time, she traveled to the Holy Lands in Jerusalem. During her travels, she is credited with finding the True Cross. Legend says that she was tipped off to the cross’s existence because she found the aromatic herb, basil, growing in the shape of a cross. Each year on September 14th, Orthodox Christians remember the cross on September 14th on the Feast Day of the Elevation of the Cross by taking home some fresh basil.

Hymns of Saints Constantine and Helen

Saints Constantine and Helen share a feast day of May 21st and are often remembered together. They also share the hymns that are sung on their feast day. Here’s more information:

Apolytikion of Constantine and Helen – Plagal of the Fourth Tone

He beheld the image of Your Cross in the Heavens and, as Paul, he too did not receive the call from men. Your Apostle among Kings placed the care of the Royal City in Your hands. Through the intercessions of the Theotokos, O only Loving Lord, keep it ever in peace.

Today, Constantine with his mother Helen present the Cross, the most precious wood. It shames unbelievers. It is a weapon of faithful kings against their adversaries. A great sign has come forth for us which is awesome in battle.

Saints Constantine and Helen are two early saints of the Orthodox Christian Church and they share a feast day on May 21st because they made their contributions to Christianity together. Check the Name Day page for more information about other Orthodox Christian name days.