Written by GreekBoston.com in Ancient Greek History Comments Off on All About the Amphictyonic League 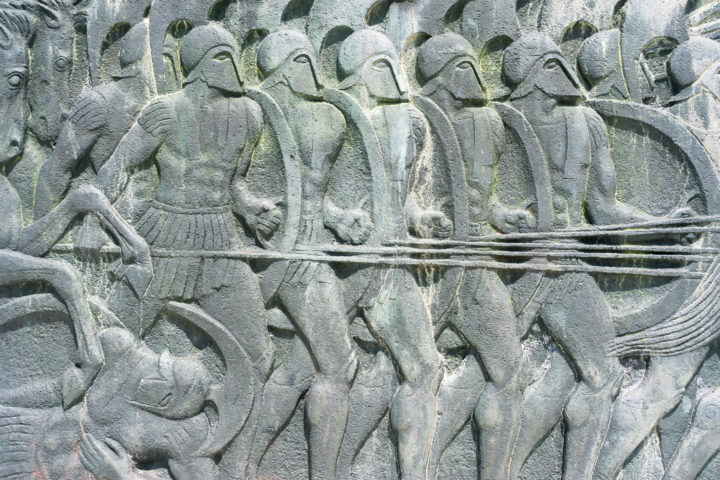 Most of us understand that Ancient Greece wasn’t one, cohesive nation. Rather, the geographical area that we refer to as Ancient Greece was actually made up of a series of different tribes all speaking a common language that later formed into city-states. As the tribes settled in different areas and grew in population, the city-states formed. The Amphictyonic League was an alliance that was made between some of those tribes. However, the alliance did appear to stay intact after the city-states began to form. Here’s more information:

What the Amphictyonic League Was

The Amphictyonic League, also called, “The League of Neighbors”, was an alliance of Greek tribes that formed well before the city-states themselves were formed.  There were twelve tribes that were part of it, including the Aenianes or Oetaeans, the Boeotians of Thebes, the Dolopes, the Dorians of Sparta, the Ionians of Athens, the Phthian Achaeans the Locrians, Opuntians and Ozolians , the Magnesians, the Malians, the Perrhaebians, the Phocians, the Pythians of Delphi, and the Thessalians, all of which participated in the idea of greater supporting and protecting the temples of Demeter in Thermopiles and Apollo in Delphi.

The Amphictyonic League in Politics and Warfare

This league had played a key role in the all four of the Sacred Wars. One of the most important things that were established under the league was that no group would ever be eliminated entirely during wartime, and water shall always be accessible to the people. Because of the First Sacred War, which lead to the new control of the wealth of the oracle and the vanquish of the old priesthood, the Delphic Amphictyonic League became the military overseer and defender of the war at Delphi. They soon became politically active in trying to resolve the conflict in Krissa peacefully, during which the city was taxing those who wished to cross there to go to Delphi from 596 to 585 BC, which then lead to the First Sacred War.

The Eventual End of the Amphictyonic League

While the league only lasted until the gradual declination during the 2nd century AD, their political power was just as strong during the Second and the Fourth Sacred War, while also participating in the ten-year war between the Phocians and the Macedonians. From 449-448 BC, the Phocians wished to become the master of sanctuary and so, Sparta intervened and fought them as they marched into Delphi, causing the Second Sacred War to begin. After the Spartans left, the Athenians gave Delphi back to the Phocians. During the Third Sacred War, the Phocians captured Delphi once again, causing them to be expelled from the League in 346 BC, in which the vote was made possible due to the Macedonians. Afterwards, Philip II of Macedonia used this vote to push his expansion agenda, causing the Fourth Sacred War, which was being built up at the Battle of Chaeronia in 338 BC.

In 279 BC, not only were the Phocians readmitted into the League for it being able to defend the sanctuary and mainland Greece against the Gauls, but admitted the Aetolians into the League as well for doing the same thing. It soon declined closer to the 2nd century AD and was replaced by the Panhellenion created by Hadrian, a Roman emperor. No actual date has been made regarding its termination.

The Amphictyonic League had brought forth the idea of a permanent alliance among other countries and republics. This league has lived to its reputation of being “the league of neighbors”.