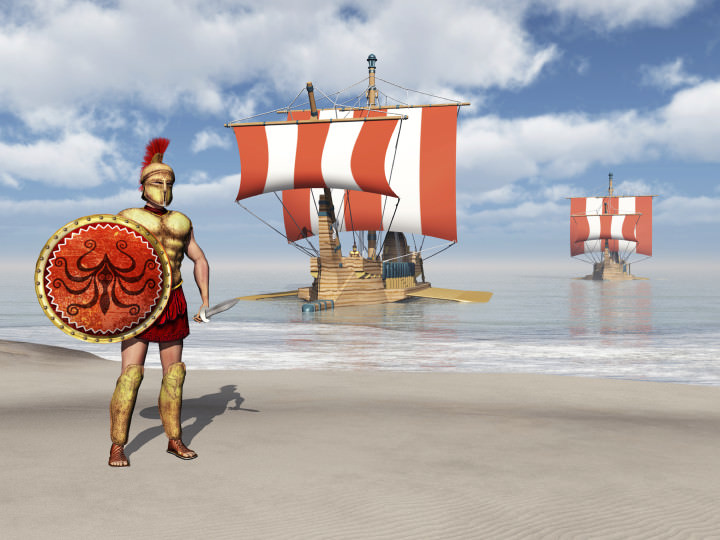 Because many city-states in Ancient Greece were near the sea, ships were an important part of the culture. Back then they were used for fishing, exploring, and trading. Not only that, but the Ancient Greek navy, particularly that of the city-state of Athens, was formidable! When the Ancient Greek navy entered a battle, the opponents knew that that it would be difficult to win. In fact, the naval tactics were fairly advanced and the naval soldiers constantly practiced and honed their techniques.

As a result of all this, shipbuilding was a highly valued profession. Master shipbuilders created some of the most technologically advanced ships in the ancient world – and they were devoted to constantly making the ships even better. However, there were few advancements that were more important, and more influential, than the anchor. Here’s more information about how the Ancient Greeks invented the anchor:

The Need for an Anchor Arose

Prior to the invention of the anchor, ships needed to be tied to something extremely sturdy. While this is an effective way of keeping the boat still, it often wasn’t enough. What if the ship needed to stay still when there was nothing to tie it to? The Ancient Greeks loved to take long journeys, and they often found themselves in remote places when they needed to tie their ships down. Finding that many of these places didn’t give them the option, they knew that they needed a way to weigh the ship down enough so that it wouldn’t move around when it couldn’t be tied.

Prior to the Ancient Greeks, ancient ships would often throw large stones that were tied with ropes over the side of the boats to keep them steady. Even though this did work up to a point, it didn’t work all that well. No matter how heavy the stone was, it would still drift slightly in the ocean. The Ancient Greeks solved this problem by created the first real anchors, which they often referred to as “teeth”, or ὀδὁντες in the original Greek. These first anchors were made from buckets that were filled with stones. These buckets would grab onto the dirt at the ocean floor, thus keeping the ship in plate. Because each ship had several of these anchors, it made the ship even steadier. Even when there was a place to tie the boat to, the anchors were still used to provide extra stability.

Over the years, the original design for the anchor evolved into the anchor shapes that we see today. Typically, anchors today consist of a large metallic object with large hooks on each side. The hooks are used to keep the boat in place. However, this particular invention wouldn’t have been possible if it weren’t for the ingenuity of the people of Ancient Greece.

Because the sea was an important part of life in Ancient Greece, it led them to invent important things such as the anchor, which effectively kept the boat in place when it couldn’t be tied.

Wikipedia – History of the Anchor

How the Olympians Defeated the Titans