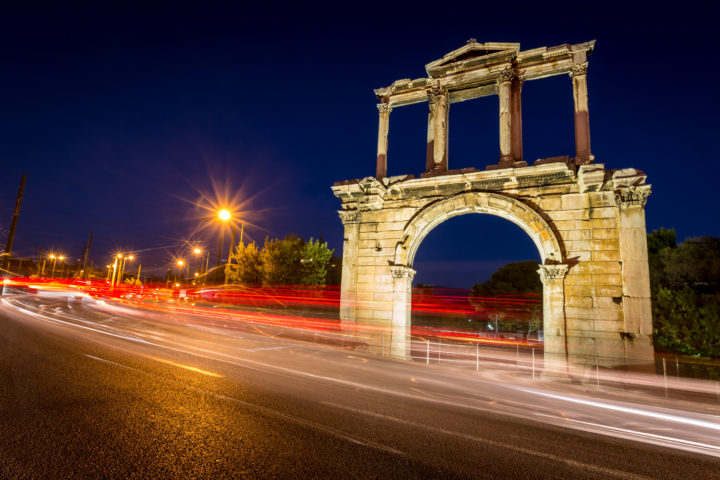 In the Ancient Greek world, the city-state of Athens was the center of everything. The cultural, political, and social advancements made by the Athenians in a short 200 years were unparalleled by any rival Greek city-state. However  This period in Greek history is aptly known as Roman Greece. It began with the Roman’s victory over the Corinthians at the Battle of Corinth in 146 BC and lasted until the Roman Emperor Constantine founded the city of Constantinople in 330 AD. The latter, of course, would lead to the rise of the culturally Greek, Byzantine Empire.

The Roman Poet Horace wrote, “Greece, the captive, made her savage victor captive.” Potently explaining that although Rome had militarily defeated Greece, Greek cultural and civilization captivated the Romans and strongly influenced and shaped their civilization. This is seen in the way monuments were continually built in ‘conquered’ Athens throughout the Roman period. In fact some of the city’s most famous ancient landmarks are from this period. We’ll take a tour of seven of the most popular landmarks from Athens’ Roman past. First off we’ll take a look at the Temple of Olympian Zeus, Arch of Hadrian and the Theater of Herod Atticus.

About the Temple of Olympian Zeus
Located only a little over half-a-mile from the Acropolis, the Temple of Olympian Zeus [Grk: Ναὸς τοῦ Ὀλυμπίου Διός] is a half ruined colossal temple dedicated to Zeus, the chief of the Olympian gods. The temple was actually started in the 6th Century BC, but was incomplete until the Roman Emperor Hadrian finished it in 132 AD, part of his numerous building programs in Athens.

Made with Pentelic marble, the temple is the largest in Greece, even larger than the famous Parthenon standing above it. Each gigantic, ornate Corinthian column stands at an astounding 56 feet tall and 6.5 feet thick. Today only 15 of the original 104 columns remain standing; the sixteenth column was blown over during a fierce windstorm in 1852 and was left lying where it had collapsed. Although only a very small fraction of the original temple remains it is still very easy to get a sense of how massive the temple is and must have been. The ruins have unsurprisingly become one of the most popular and significant monuments of the city.

About the Arch of Hadrian
The Arch of Hadrian [Grk: Αψίδα του Αδριανού] also commonly referred to as Hadrian’s Gate [Grk: Πύλη του Αδριανού] is a monumental gateway built by the Emperor Hadrian, who was an admirer of Greek culture. The 59 foot gate is made from Pentelic marble in the Corinthian order and stands only yards from the Temple of Olympian Zeus.

It was originally part of wall built to separate the old and new cities of Athens. There are two inscriptions above the arch. On the side facing the Acropolis it reads, “This is Athens, the ancient city of Theseus”, while the side facing the Temple of Olympian Zeus reads, “This is the city of Hadrian, and not of Theseus”. Despite missing the columns on its lower level, the Arch has been extraordinarily well preserved. However, located mere feet from heavily used Amalias Avenue, the Arch’s marble has been significantly discolored and damaged from pollution.

About the Odeon of Herod Atticus
The Odeon of Herod Atticus [Grk: Ωδείο Ηρώδου του Αττικού] also commonly called the Herodeion [Grk: Ηρώδειο] is a stone theater located on the southwest slope of the Acropolis. It was built in 161 AD by a wealthy Greek aristocrat and Roman senator in memory of his wife. To improve acoustics the theater was covered with a timber roof without any internal support. The amphitheater has a three story, arched stone façade that in large part still stands today. Its 30 rows of seating hold 5,000 people.

Unfortunately after only about 100 years it was destroyed and turned into a ruin by the marauding Heruli tribe in 267 AD. With the exception of the roof, the Odeon was completely restored in 1950 using Pentelic marble for the rows of seats. The restored theater is still in use today and has hosted countless Greek and internationally renowned musicians. It is used often during the summer when the Athens Festival takes place. 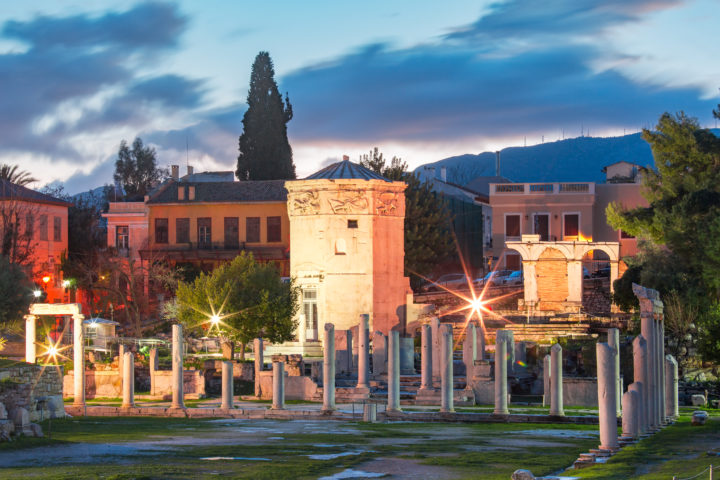 After taking a look at the Temple of Olympian Zeus, Hadrian’s Arch and the Odeon of Herod Atticus at the base of the Acropolis, four other major landmarks of Roman Athens remain that have yet to be seen. In Greece, as well as Athens, the Roman period spans the time between the Roman victory at the Battle of Corinth in 146 BC and the Emperor Constantine’s founding of Constantinople in 330 AD. Several of Athens most popular ancient sites hail from the Romans’ time in the city. Starting off at the Philopappou Monument crowning Philopappou Hill, we’ll head to the Roman Agora and the Tower of the Winds before ending at Hadrian’s Library on the edge of today’s Monastiraki Square.

About the Philopappos Monument
The Philopappos Monument [Grk: Μνημείο Φιλοπάππου] is an ancient marble tomb and monument built for the Roman consul and senator Gaius Julius Antiochus Epiphanes Philopappos—or Philopappos. The powerful aristocrat had long admired Greek culture and had chosen to live in Athens where he sponsored countless plays and cultural events for the city.

Upon his death, the Athenians along with his daughter built the 40 foot high monument of expensive Pentelic marble atop the highest point of the Hill of the Muses [today called Philopappou Hill]. Although only 2/3 of the monument survives, several of the original sculptures and decorations still adorn the structure. While exploring the monument, don’t forget to take in the magnificent view of the Acropolis spread out behind you, but luckily it’s one that is simply pretty hard to miss.

About the Roman Agora
The Roman Agora [Grk: Ρωμαϊκή Αγορά] was built in the 1st Century BC, when it was decided that the original Agora of Athens was not adequate in dealing with the city’s commercial activities. The new Roman Agora had a purely commercial purpose to it, and was therefore much smaller than its ancient neighbor to the west. It was a large open space bordered by Ionic colonnades, of which only a few decapitated columns remain standing.

The two most prominent remains of the Roman agora are the Tower of the Winds, and the Gate of Athena Archegetis. The gate stands at the western end of the Agora and is made of 4 Doric columns. Although the site has not been totally excavated yet the remains are still impressive. It is conveniently located next to the old Ottoman Fethiye Mosque very close to modern Monastiraki Square.

About the Tower of the Winds
The Tower of the Winds [Grk: Αέρηδες] is also known as the Horologion of Andronikos Kyrrhestos [Grk: Ωρολόγιο του Κυρρήστου]—Horologion meaning timepiece. The 40 foot high octagonal tower is made of Pentelic marble and featured sundials, a wind vane on top that told wind direction and even an internal water clock that was powered using water that flowed down from the Acropolis. The frieze on each of the eight sides features one of the eight wind deities, which helped give the Tower its name.

The Tower today stands in what remains of the Roman Agora. During the Ottoman Era the tower was buried up to half of its height, and it would not be until the 19th Century that it would be fully excavated. Several replicas and buildings based on the unique architecture of the Tower of the Winds have been built around the world, a credit to its design and beauty.

About Hadrian’s Library
Hadrian’s Library [Grk: Βιβλιοθήκη του Αδριανού] was built by the Roman Emperor Hadrian in the year 132 AD. Hadrian loved Greek culture and thus he visited Athens very frequently. During his visits he initiated several building projects, and he openly aimed to make Athens the cultural capital of the Roman Empire. Building his grand Library was a great step in making that goal a reality.

It is said that the Library held almost 17,000 papyrus scroll and was exquisitely decorated with mosaic and marble floors and featured a large pool of water at its center. However, The Library was severely damaged in 267AD by the Heruli tribe [the same tribe that destroyed the Odeon of Herod Atticus] but was later repaired at the beginning of the 5th Century AD.

In the Byzantine period, three churches were built on the grounds of the building complex, the remains of which can still be seen today. The most impressive ruins of the Library that have remained standing are the outer western wall that features decorative Corinthian columns, as well as the monumental portico that served as the entrance to the Library’s courtyard.