Written by GreekBoston.com in Ancient Greek History Comments Off on Learn About the Battle of Aegospotami 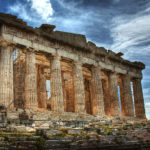 The Battle of Aegospotami, in 405 B.C., was the final and most significant battle of the Peloponnesian War, which was a conflict between the city-states of Athens and Sparta. With the help of the Persians, the Spartans defeated the Athenians in this naval battle. This left Athens vulnerable and with a naval blockade that made it impossible to import grain and vital supplies.

Prior to this, Athens was always the most powerful city-state in ancient Greece. This marked a shift in power. Because of their loss in this battle, Athens was forced to surrender on April 25, 404 BC. Here’s more information about the battle:

Get to Know Lysander

The two major players, admirals or navarchs, as the leaders of Greek ships were called in the 5th century, were the Spartan of the Peloponnesian League, Lysander, and the Athenian of the Delian League, Conon.

Although Lysander was not the official leader of the siege, he was the active, on-duty leader. He had previously been dismissed as navarch in an earlier part of the Peloponnesian War, after the Battle of Notium, due to term limits. Since it was Spartan law that a navarch could not be reinstated officially once his term was over, he was given the title of vice-admiral.

His close friendship with Prince Cyrus of Persia served him well in the Battle of Aegospotami. The vast amount of revenues he received from the Prince allowed him to rebuild the fleet that was destroyed in an earlier battle of the war at Arginusae. Had Callicratidas, the official leader of the battle, been in actual charge of the fleet, the Spartans may not have realized the victory at Aegospotami. Callicratidas did not have a good relationship with the Persians. He was distrustful of them and would never have received their vital help.

Details of the Battle of Aegospotami

Although it’s called a naval battle, the actual siege was on a beach. It was a five-day interaction, but the actual battle took place in only a few hours of the fifth day. The Athenians were not strategically set up for this battle. Aegospotami was merely an open beach, and the Athenians had to get supplies at their base in Sestus, too far away to keep a close eye on Lysander whose fleet was at Lampsacus, a short distance from Aegospotami.

For the first four days, Conon tried to entice the Spartans into battle, but they refused to engage. Instead, Lysander commanded his fleet to keep a close watch on their comings and goings. They made a surprise attack when most of the ships in the Athenian fleet of 180 were abandoned to retrieve supplies in Sestus. Almost the entire fleet was destroyed by fire.

As with any wars there is intrigue and sometimes rumors of treasonous actions causing the downfall of the defeated. Whether or not this is the case in this naval atrocity, leaving themselves wide open for attack on the beach at Aegospotami, the Athenians were bound to lose this battle.