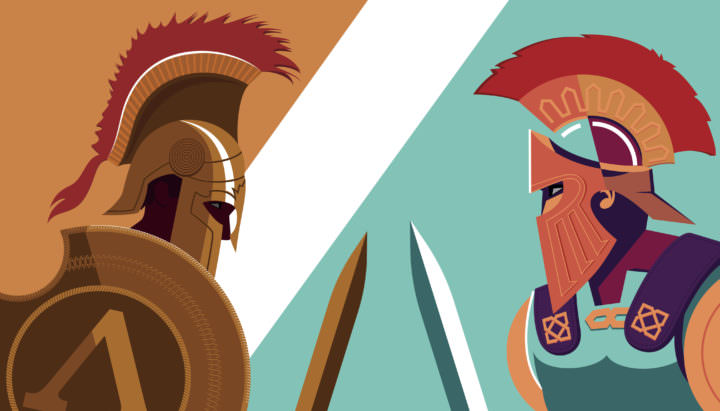 The Battle of Pydna in 168 BCE is perhaps one of the most important events of antiquity. In many ways it can be seen as the confrontation that Greece and Rome were building towards throughout their histories until that point. It would see the legacy of Alexander’s Macedonia take on an ascendant Rome, who had just begun to stretch their arms outside Italy. Ultimately, Macedon would lose this battle. Here’s more information:

Background of the Battle

In 179 BCE a man named Perseus became the king of Macedonia, the Greek successor state of Alexander the Great’s empire. Thoroughly anti-Roman and a fair bit ruthless, Perseus began to drum up anti-Roman sentiments in the region, leading Rome to declare war on him in 171 BCE. The Romans initially made inroads into Macedonian territory, but a year later would be all but driven out of their conquests as Perseus rallied his armies. Consul Lucius Aemillius Paullus would then take control of the forces in Greece, and pin Perseus down in a town south of the town of Pydna in June 168 BCE. The day following a lunar eclipse, seen as an ill omen, the battle erupted in earnest.

Information About the Battle

The early fighting was favorable to the Macedonians, who had a slight advantage in numbers and the feared phalanx. Their many rows of pikes held the Romans at bay for the brunt of the initial fighting, with Roman charges breaking on the phalanx formation.

Seeing no way to break the phalanx, the Romans made a steady retreat over the rugged terrain on the southern slope of the battlefield. As the Macedonians pushed uphill, it soon became impossible to lock their polearms in as tight a formation necessary to maintain the phalanx, and their lines became scattered. Turning into the pursuit, the Roman legionaries had no such problems, and with their pikes rendered useless, the phalanx fell to the heavier Roman infantry and their shields and shortswords.

Perhaps the most conspicuous non-factor was King Perseus himself, whose cavalry never engaged the Romans, before he fled from battle seeing the tide turn against him.

Consequences of the Battle

While contemporary stories attributed the victory to the legion’s flexibility triumphing over the phalanx’s rigid formations, modern skepticism has re-assessed the failure more towards Perseus’ failure of command than inherent weakness in the Macedonian army.

Of the some 40,000 soldiers the Macedonians fielded that day, half were killed in the afternoon battle. Of note were the elite guard, who fought to the last man. Losing his best trained fighters, Perseus was forced into a peace. While it was not the last Greco-Roman conflict, it did mark the last real challenge on the peninsula to Roman dominance.

In addition to bringing Perseus to Rome to be paraded in a triumph, Macedonia was split into four separate republics, all of which would later be annexed by Rome some years later. These client states would ensure that the Hellenistic world was no real threat to Roman power. This battle certainly did shift the balance of power in Rome’s favor.