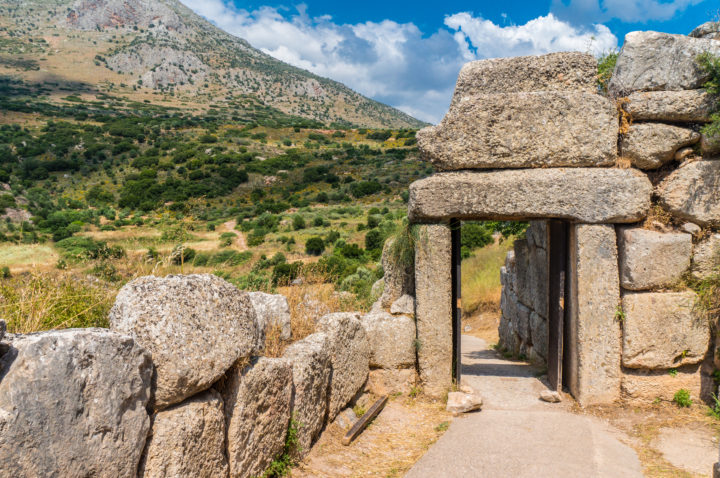 The Greek Dark Ages refers to the period in Greek history between the collapse of the Mycenaean civilization in approximately 1100 BC and the emergence of city states about 200 years later. During this transition, as suggested by the archaeological evidence, life in the Eastern Mediterranean world was bleak. This time period brought with it starvation, sharp declines in population and cultural changes that are suggestive of a reversion to a simpler, more survival-based way of life. Here’s more information:

Fall of the Mycenaeans Ended the Bronze Age

The Mycenaean civilization is believed to have been mainland Greece’s first advanced society, which boasted grandiose structures, efficient urban organization and a sophisticated writing system, a syllabic script known as Linear B. Historians attribute the fall of Greece’s last Bronze Age society to an uncertain mixture of invasion, natural disaster and the increasing availability of iron weapons. Whatever the exact cause, historians generally believe the initial collapse was quick and violent.

Scholars in support of the notion that invasion was the predominant cause of the Mycenaeans’ collapse admit that they are uncertain of exactly who the attackers were, but they contend that the Sea Peoples are the most likely answer. The Sea Peoples were an alliance of naval raiding parties of unknown origin and were responsible for attacking coastal Mediterranean cities between approximately 1276-1178 BC. It is well known that the Sea Peoples focused mainly on Egypt. In fact, the Sea Peoples appear in the records of three different Egyptian pharaohs: Ramesses II, Merneptah and Ramesses III. It is conceivable that the Sea Peoples, having acquired iron weapons during their travels, simply outmatched the defending Mycenaeans.

Changes in Greek culture during the Dark Ages are evident in both the artworks of the time and fundamental changes in the way the region governed its inhabitants. The people stopped using the Linear B script, did not endeavor to build grand structures, and their artwork, most notably their pottery, reverted from complex designs to simpler geometric ones. For this reason, some scholars refer to the Greek Dark Ages as the Geometric period.

Archaeological evidence shows that by 900 BC, Greece was already showing signs of economic recovery. The people were making exotic offerings such as ivory and amber at Greek cemeteries, and they had resumed pottery exports, which were already becoming more elaborate and travelling long distances. These improvements marked the end of the Greek Dark Ages and the beginning of the Greek poleis.

The Greek Dark Ages was a tough time for those living in Ancient Greeks. Eventually, however, the people built themselves up to be stronger than ever.