Written by GreekBoston.com in Ancient Greek History Comments Off on The Ancient Greeks Head West During the Dark Ages 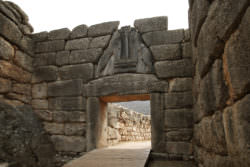 It’s true that times were tough and that it appeared as if the Ancient Greek civilization was in a decline. In response to these difficulties, the Hellenic-speaking people began to migrate. Here’s more information about it:

During this time, people left the Greek mainland and they headed both east and west. While most did head East to Asia Minor, which is know modern-day Turkey, others went in a different direction. Many of these people headed westward towards Italy and the Greeks established locations in Italy, France, and Spain; and headed as far south as Africa building colonies in Egypt and throughout North Africa. In fact, although this was considered to be a dark time, the migration began to spread the Greek influence into a larger area. When the culture began to flourish once again, the fact that the people were spreading out became an asset. 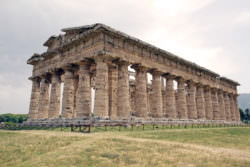 The Greeks and the Italians have a very colored past. Both countries share a similar spice palette and share many dishes that are famous around the world. Additionally, the Romans basically modeled their Gods and Goddesses after the Mythology from Greece (except for the fact that they changed all the names). There are countless stories of the Romans overtaking the Greeks during their quest for world dominance, yet the Ancient Greeks lived in Italy for hundreds of years co-existing with the inhabitants of the Italian peninsula.

Much like Greece, Italy has a southern part of the country that connects with Sicily and a northern section that connects to Europe via France, Switzerland, Austria, and Slovenia. When the Ancient Greeks sailed over from the mainland, they primarily established their own colonies in southern Italy and in Sicily. In fact, because so many Greeks migrated to southern Italy, they began referring to the area as Magna Graecia. When translated from Latin, it means Greater Greece.

The Ancient Greeks founded the Italian cities of Naples, Capua, and Taranto. Back then, they were given the names of Neapolis, Kapue, and Taras respectively. The Greeks also founded the powerful city-state of Syracuse on the island of Sicily. Believe it or not, the Ancient Greeks lived peacefully alongside the Italians for almost 500 years when the Romans conquered the Greeks and absorbed them into the Roman Empire.

Sailing past Sicily, some Greeks landed in Northern Africa and began setting up shop on the African continent. Some of the Ancient Greeks encountered Egypt and set up a new life alongside the Ancient Egyptians. Coincidentally, it was during this time which Egypt allowed trade with other Mediterranean cities. Egypt had been closed off to the Mediterranean market for thousands of years, but their decision to expand their trade routes coincided directly with the Greek’s expansion of trade routes and migration to other countries. Had Egypt not been so open to accepting visitors from the Mediterranean, the Ancient Greeks probably wouldn’t have stayed long in the area.

Further west beyond Egypt, the Ancient Greeks established a colony along the coastline of what is now Libya. Around 630 BC, a group of Greek adventurers left from the island of Thera (which is now Greece’s famous island, Santorini) and sailed over to Libya. Once there, they established the town of Cyrene which became a major point of commerce as it was in the middle of Egypt which was inhabited by both the Egyptians and the Ancient Greeks, as a well as the Phoenician establishment of Carthage, which was located on the coast of Tunisia.