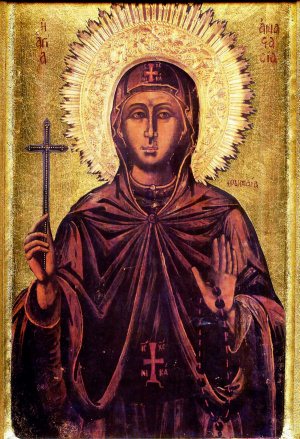 It’s true that the saints are an important part of our church history. As a result of this, Orthodox Christians often make a regular habit of learning about the lives of these saints either on their own or during church services that feature the saints. Some are even named after these saints, and those who are will celebrate their name day on the saint’s feast day.

Saint Anastasia, also referred to as Anastasia the Roman, is one of these saints. Her feast day is celebrate each year on October 29th. Here is more information about who she is and what she is known for:

Anastasia was born in Rome to affluent parents, but they abandoned her when she was a small child. Orphaned, she ended up at a monastery for women. Sophia, the nun in charge of the monastery, assisted in raising her. Sophia was a perfectionist and had high standards, and she raised Anastasia in the ways of the Christian faith. She become well known amongst the people for her gifts. To the Christians, she was known for her faith and devotion to the ascetic life. The pagans simply came to know her for her beauty.

Saint Anastasia was alive during a turbulent time in Rome. Christians were regularly persecuted, and eventually Anastasia herself experienced persecution. The governor of the city, Probus, heard of Anastasia and asked that she be sent to him. In front of an audience and the governor himself, she proclaimed her faith and her love and devotion for Jesus Christ. Probus was a pagan and didn’t agree with her.

Probus first tried to flatter her by saying, “”Why waste your youth, deprived of pleasure? What is there to gain by enduring tortures and death for the Crucified? Worship our gods, marry a handsome husband, and live in glory and honor.” Instead of agree with him, she replied, “”My spouse, my riches, my life and my happiness are my Lord Jesus Christ and you will not turn me away from Him by your deceit! I am ready to die for my Lord, not once but – oh, if it were only possible! – a thousand times.” She never wavered and eventually became a martyr.

Saint Anastasia has some hymns that are usually sung or chanted during her fast day. The words of the hymn can be found in many languages, including Greek. Here are the words as they have been translated into English:

Your lamb Anastasia, calls out to You, O Jesus, in a loud voice: “I love You, my Bridegroom, and in seeking You I endure suffering. In baptism I was crucified so that I might reign in You, and I died so that I might live with You. Accept me as a pure sacrifice, for I have offered myself in love.” Through her prayers save our souls, since You are merciful.

Purified by the waters of virginity, righteous Anastasia, you were crowned by the blood of martyrdom. You grant healing and salvation to those in need, and who call on you from their hearts, for Christ gives you strength, pouring out on you ever-flowing grace!

OrthodoxWiki – Anastasia the Roman – Also source for image above