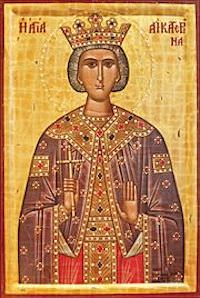 When people in the Orthodox Christian Church name their children, they tend to think about what the child’s name day would be. It is considered to be a great honor to be named after a saint, and each year, Orthodox Christians celebrate their name days, sometimes even instead of their own birthdays. It is also customary to learn about the life and works of each of these saints.

Although the Twelve Apostles and all of the original Seventy Apostles were men, there were some women who were important to the early days of the church and Saint Catherine of Alexandria was ice of them. Her name day is celebrated on November 25th of each year. Here is more information about this Saint:

About Saint Catherine of Alexandria

She lost her life in 305 B.C. when she was just seventeen or eighteen years old. During her short time on the earth, she made an impact to Christianity. Her mother was a Christian but she practiced in secret. During a pagan festival, Saint Catherine confessed her faith publicly, which is why she ultimately lost her life for her beliefs. She is looked at as someone who lived a truly Christian life and wasn’t afraid to celebrate her beliefs before others. It is said that her death occurred on November 24th, which is one of the reasons why we celebrate her feast day on November 25th.

Hymn of Saint Catherine of Alexandria

Saint Catherine is celebrated in this hymn. It is also called the Troparion of Saint Catherine. There are two versions – one is Greek in origin and the other is Slavic. Here’s the hymn:

Let us praise the all-lauded and noble bride of Christ,
the godly Catherine, the guardian of Sinai and its defense,
who is also our support and succour and our help;
for with the Holy Spirit’s power
she hath silenced brilliantly the clever among the godless;
and being crowned as a martyr, she now doth ask great mercy for us all.

Thy lamb Catherine, O Jesus,
Calls out to thee in a loud voice:
I love thee, O my bridegroom,
And in seeking thee, I endure suffering.
In baptism I was crucified so that I might reign in thee,
And died so that I might live with thee.
Accept me as a pure sacrifice,
For I have offered myself in love.
By her prayers save our souls, since thou art merciful.

Saint Catherine’s name day is on November 25th of each year.Check the Name Day page for more information about other Orthodox Christian name days.