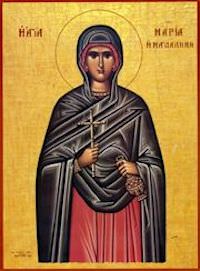 There are many saints in the Greek Orthodox Church, and they all have a special part in the church’s history. Webster’s Dictionary defines a saint as, “one officially recognized especially through canonization as preeminent for holiness”. Each of these saints have had unique journeys, and Christians all over the world are named after them. Some of these saints, such as Mary Magdalene, were even alive during Jesus’s time. Her feast day is on July 22nd of each year. Here’s more information about Saint Mary Magdalene:

Mary Magdalene, also referred to as great and holy myrrh-bearer Mary Magdalene, has a special place in church history. Mentioned in the Bible, she is considered to be equal to the apostles because she is the first to have been told about Jesus’s resurrection. She is well known to have lived a life filled with sin before she began following Christ. In Luke, it was mentioned that she had as many as seven demons inside of her, and all of them were cast out. She is known as the myrrh bearer because she took the time to anoint Jesus’s body after he died on the cross according to Jewish custom. Other women witnessed her doing this and began to help her. She is also the first to have seen Christ after he rose from the dead.

Mary Magdalene in the Bible

“And many women who followed Jesus from Galilee, ministering to Him, were there looking on from afar, 56 among whom were Mary Magdalene, Mary the mother of James and Joses, and the mother of Zebedee’s sons. 57 Now when evening had come, there came a rich man from Arimathea, named Joseph, who himself had also become a disciple of Jesus. 58 This man went to Pilate and asked for the body of Jesus. Then Pilate commanded the body to be given to him. 59 When Joseph had taken the body, he wrapped it in a clean linen cloth, 60 and laid it in his new tomb which he had hewn out of the rock, and he rolled a large stone against the door of the tomb, and departed. 61 And Mary Magdalene was there, and the other Mary, sitting opposite the tomb.” (Matthew 27:55-61)

There are some hymns that can be found in the Orthodox Christian church service that celebrate Saint Mary Magdalene. Here are the details:

In keeping His commandments and laws, O holy Mary Magdalene,
You followed Christ, who for our sake was born of a virgin,
And in celebrating your most holy memory today,
We receive forgiveness of sins by your prayers!

When God, who is transcendent in essence,
Came with flesh into the world, O Myrrhbearer,
He received you as a true disciple, for you turned all your love toward Him;
Henceforth you would yourself work many healings.
Now that you have passed into heaven, never cease to intercede for the world!

Standing before the Cross of the Savior,
Suffering with the Mother of the Lord,
The most glorious Mary Magdalene offered praise with tears.
She cried out: What is this strange wonder?
He who holds the whole creation in His hand chooses to suffer:
Glory, O Lord to Your power!

Saint Mary Magdalene’s name day is on July 22nd of each year. Check the Name Day page for more information about other Orthodox Christian name days.