Written by GreekBoston.com in Ancient Greek History Comments Off on Pankration – Sport of the Ancient Olympic Games 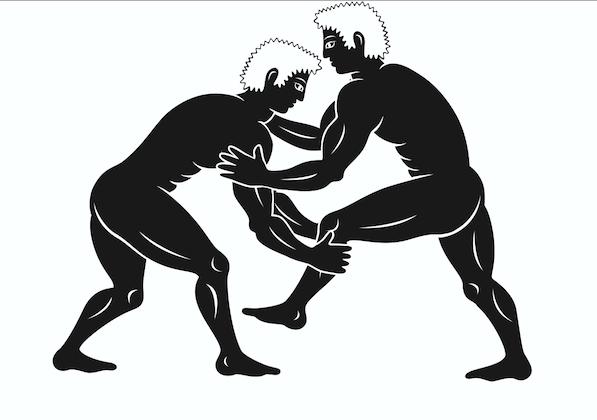 Most of us know that the Olympic Games originated in Ancient Greece. Our modern Olympic Games were modeled after it, but there were some differences and similarities. While it is true that both the ancient and modern Olympic Games had some of the same sports, there were some differences. For example, the fighting sports that are in competition today look different than the fighting sports of Ancient Greece. Pankration was one of these ancient sports. Here’s more information about what Pankration is and how it was part of the Ancient Olympics as well as other competitions:

If we were to watch a Pankration match today, we would say that it looks like a combination between boxing and wresting. While this is partially true, there are some differences. Our wrestling and boxes matches today are controlled affairs with plenty of rules. Pankration had no rules that were enforced during competitions. Besides that, it was also the fighting style that was taught to warriors in city-states such as Sparta, where there soldiers were known for their fighting prowess.

The legend behind Pankration is that it was developed by two heroes of Greek mythology, Hercules (Herakles) and Theseus. It is said that the pair invented the sport because when they were fighting their opponents in the myths and legends, they tended to use a combination of wrestling and boxing. Over time, they honed and refined the technique in order to make their style of fighting even more effective. As the legend states, this is the style of fighting that helped Theseus best the Minotaur when he finally killed it. In the case of Hercules, it is thought that Pankration was used against the Nemean Lion while he was performing his legendary Twelve Labors.

On some level, competitive fighting is usually a little different than the type of fighting that was done on the battlefield. Although the common belief is that there were no rules with this style of fighting, there actually were rules in competition. There were typically a few age classes when in competition. However, unlike our modern style of fighting, there weren’t weight class distinctions. There were referees who were in charge of enforcing the rules. However, there were generally only two rules. Competitors weren’t allowed to gouge out each others eyes and they also weren’t able to bite their opponents. In Sparta, however, it was a different story. Those two rules didn’t exist in Pankration competitions in that city-state.

It is interesting to note that some version of Pankration still exists today. A Greek-American named Jim Arvanitis is credited with introducing western audiences with this ancient fighting style. Although the exact details of the sport aren’t entirely known, he did his best to reconstruct it based on the ancient style. It hasn’t been reinstated as an event in the modern Olympics, but there are plenty of other fighting sports present at the Olympics that athletes can enjoy.