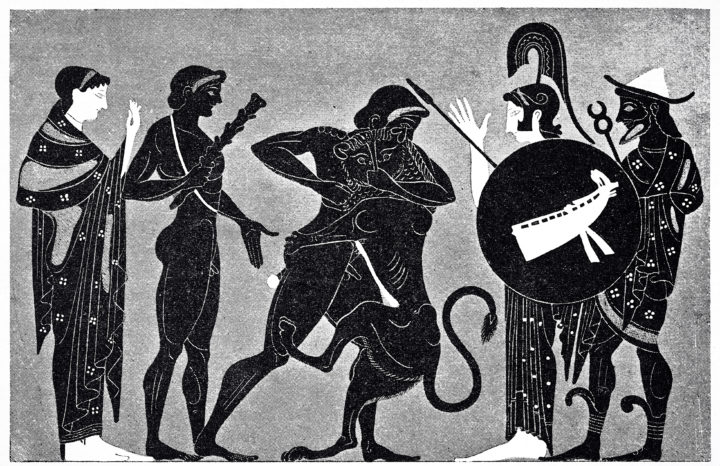 When asked to imagine Ancient Greek clothing, most people would picture a toga, and they wouldn’t be far from the truth. We have this idea that the Ancient Greeks draped fabrics over their bodies, and this is often reflected in the way dress when we want to mirror the Ancient Greeks, such as when creating a costume for Halloween or a college fraternity party. As it turns out, there is a lot of truth to these assumptions.  These garments reflected the hot climate, relatively rudimentary cloth-making capabilities, and societal norms and expectations of this time period. Here’s more information about the clothing in Ancient Greece.

Fashion for the Heat

The weather that the Ancient Greeks experienced on a regular basis necessitated a light and breathable fabric. Most commonly, silk, linen, and wool were used for the himation, which in length based on amount of materials available. Given that, there was a need to reduce waste, so cloths were rarely cut once produced. Ornamental clasps served as the Ancient Greek equivalent of a safety pin, holding the fabric together around a person’s body and allowing the himation to drape and flow around their figure.

Craftsmanship of the Clothing

Given the tools and skills available, cloth-making was an extensive process, lucrative in the Ancient Greek World. Social standards delegated production of clothes to women, and they prided themselves on the quality of their garments, particularly in higher social classes. This meant that it took time to produce clothes, and that ready-make ones were a rarity. Finely woven linen, most common in the heat, and wool, more common in the cold, were the most sought after, whereas olive oil soaked flax seed linen was a regularity.

More wealthy Greeks opted for the finely woven linen, that was thin enough to show off their statuesque figures, though men did more frequently than women, who wore the peplos undergarment to cover themselves. Peasants opted for coarser wool or soaked linen, lacking the means or requiring them quicker. A misconception, understandable considering no Ancient Greek clothing survives to today, the cloths were actually quite colorful, and the more clothing a person wore and the more colorful it appeared signaled wealth.

Clothing as a Status Symbol

The specific colors signified status, as purple was the most coveted and difficult to obtain, whereas yellow was more commonplace, and red reserved for soldiers and warriors. Greens, browns, and grays were worn by peasants, though white was chosen when they lacked means. The types of garments, in addition to the chiton and the himation, represented certain statuses to the Greeks. For example, the chlamys was worn by military in about the 5th through 3rd century BC, but sometimes was adorned by hunters, as well.

Ancient Greek clothing resembled the statues that survived to the present day, but practicality influenced garments as much as form. The hot climate dictated the lightness of them, while the production did their shape. Societal norms reflected who wore what types, and what colors.