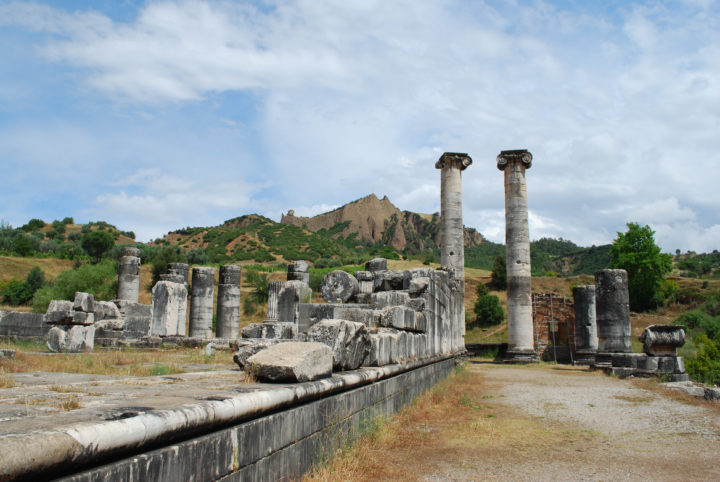 Ancient Greece was vast and the history was incredibly rich. The ancient kingdom of Lydia was part of Ancient Greece and it was considered to be prosperous. Herodotus, the Ancient Greek historian, wrote of Lydia and its most prominent king – King Candaules. Not much is known about him, but Herodotus did give an account of him.

Other historians know comparatively little about King Candaules and much of what we know about him is based on what Herodotus had to say. At the time, the name “Candaules” became associated with “candaulism”, an unsavory behavior involving the invasion of privacy. Here’s more information about this king:

About The Kingdom of Lydia

The ancient Kingdom of Lydia arose during the Iron Age. It occupied a part of Anatolia in Asia Minor well outside the boundaries of modern Greece. Today, portions of the Turkish provinces of Izmir, Usak, and Manisa include lands once encompassed within the Kingdom of Lydia.

A succession of ruling dynasties governed Lydia. Herodotus describes three of them: the Maeonians, the Heraclids, and the Mermnadae. He referred to Candaules as the last ruler of the Heraclid Dynasty. Candaules became King of Lydia following the death of his father, King Meles, sometimes during the Eighth Century BC. He ruled the country from his palace in the town of Sardis.

Herodotus describes Candaules as a depraved ruler. Reportedly, the King invited his bodyguard Gyges to spy on his queen as she undressed for bed. The Queen discovered this invasion of her privacy. She obtained revenge against her husband by ordering Gyges to assassinate Candaules under pain of death.

Gyges killed the King and seized control of the government. He married the Queen and established the Mermnadea Dynasty. Herodotus reports that the usurpation of the throne proved unpopular with many Lydians. In order to establish the legitimacy of his rule, Gyges agreed to travel to Greece to visit the Oracle at Delphi. He promised to return the throne to the Heraclids if the Oracle required him to do so. Instead, the Oracle approved of Gyges, and his dynasty became firmly established.

An Obscure History of King Candaules

Today, many historians question the accuracy of the account by Herodotus. However, most experts agree both Candaules and Gyges likely existed as historical figures. Gyges, also known as “Guges” ruled over the Kingdom of Lydia for over 30 years between 687 BC and 652 BC. He apparently married Candaules’ widow and he was followed to the throne by his son, Ardys. The famous King Croesus of Lydia traced his ancestry to King Gyges, his great-great-grandfather.

King Candaules’s life and the stories associated with him have inspired painters, particularly the historical account given to us by Herodotus.  The Flemish painter Jacob Jordaens, the English painter William Etty, and the French artist Jean-Léon Gérôme all created works of art depicting Gyges spying upon the Queen of Lydia. A number of museums have displayed their canvases to the public.

Although King Candaules isn’t well known, he did live a rich life as King of Lydia. It is interesting to learn more about him!