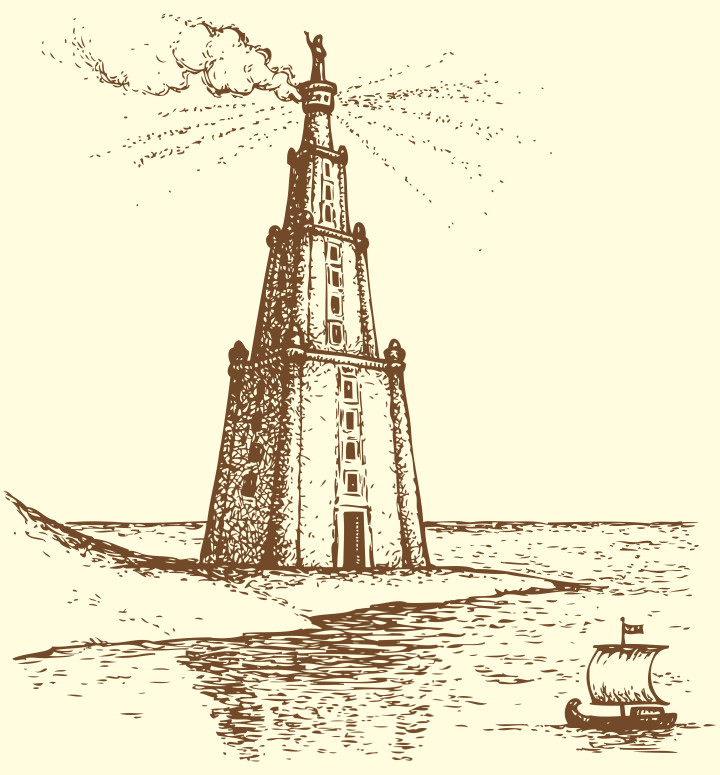 There was a time when ships relied on lighthouses to help them find their way. With modern instruments that are aboard ships now, they aren’t as important. However, they’re still used and do have a purpose. People who have spent time in coastal areas probably even take their presence for granted. They’re as much a feature of the landscape as the ocean itself. However, without the Ancient Greeks, lighthouses may not even exist today!

Modern lighthouses vary in appearance. Some older lighthouses are still in use, and there are some modern lighthouses that have slightly more unique designs. The basic principal, however, is always the same. Most lighthouses resemble tall towers and have a source of light inside. In the past, they were illuminated by things like oil lamps, which could only be seen for up to a few miles. Today, lighthouses use sophisticated illumination methods that use electricity and can be seen a long ways away. No matter when the lighthouses were made, they’re always a curiosity because they’re both beautiful and practical.

Alexandria was founded in 331 BC by Alexander the Great and quickly became one of the biggest cultural hubs in his empire. Among those cultural wonders was the lighthouse, which is considered to be one of the first lighthouses in existence. There are several drawings of this lighthouse still available today. However, the lighthouse was damaged in a serious earthquake and is no longer standing. The structure was so impressive, however, that it is one of the Seven Wonders of the Ancient World. It was constructed in 280 BC and was destroyed in the earthquake in the 1300’s. This lighthouse is the earliest that is currently on record, which gives Ancient Greece the credit for inventing it.

Features of the Lighthouse

The legendary Lighthouse of Alexandria is depicted in the sketch at the top of this article. As you can see, the artist drew a small ship to draw attention to the lighthouse’s impressive size. It also resembles the design of modern lighthouses today. Most modern lighthouses are hollowed out in the center, are as tall as possible, and have a source of light at the top. Even though modern lighthouses don’t look exactly the same as this, the basic design came from the Ancient Greeks. This particular lighthouse was built after Alexander the Great passed away. However, it was dedicated to his honor. It’s interesting to note that this lighthouse took twelve years to build.

The Ancient Greeks influenced our modern life in ways that we may not even realize. In fact, modern structures such as the lighthouse wouldn’t be possible if it weren’t for the creativity and ingenuity of the Ancient Greeks! Although the Lighthouse of Alexandria is no longer standing, it’s influence is still felt throughout the world.