Written by GreekBoston.com in Ancient Greek History Comments Off on All About the Metopes of the Parthenon 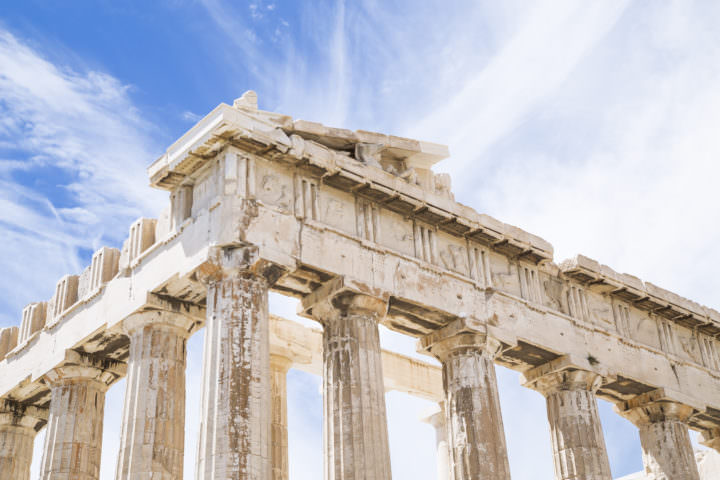 Information About the Parthenon

The Parthenon is a perfect example of a Doric temple and was built to honor the goddess Athena, the patron goddess of Athens. Construction began in 447 B.C. and the structure was completed in 432 B.C. The original construction of the Parthenon included multiple sculptures, several marble panels, and multiple columns. Over the centuries, the Parthenon has been through a lot. It has endured earthquakes, attacks, normal wear and tear, and has even been plundered. Pieces of the Parthenon have been broken apart from the temple and scattered throughout the world. Some are housed in museums, other parts of it have been destroyed entire. The Metopes were an important part of the original design.

What Metopes Are in Doric Construction

Doric temples such as the Parthenon are characterized by certain things. First, they are constructed of triglyphs, which describes the vertical, raised channels that are part of the temple. These triglyphs are alternated by the metopes, which are another construction element of a Doric temple. Each metope is positioned in between two triglyphs in the Doric architectural style. Triglyphs were composed of three vertical ridges, and the metopes were the rectangular panels that took up an area of about five feet.

Information About the Metopes of the Parthenon

This the way the Parthenon, as well as other Doric temples, were made. Total, the Parthenon had around ninety two metopes. Fourteen of these metopes were located on the east and west sides of the temple and the other two sides of the temple had thirty two metopes on each of the sides. Many of these metopes were ornately carved to include scenes from mythological battles. In fact, each side focused on different mythological story. The metopes that are located on the south facing side of the temple are amongst the best preserved. The metopes on the east side are in the worst shape. Here’s a look at the mythological stories that each side represents:

As you can see, the Metopes were an important part of the construction of the Parthenon. Although all four sides are preserved for us to see, not every side is in great shape.

Wikipedia – Metopes of the Parthenon