Written by GreekBoston.com in Greek Culture, Greek Mythology Comments Off on About Ares – God of War 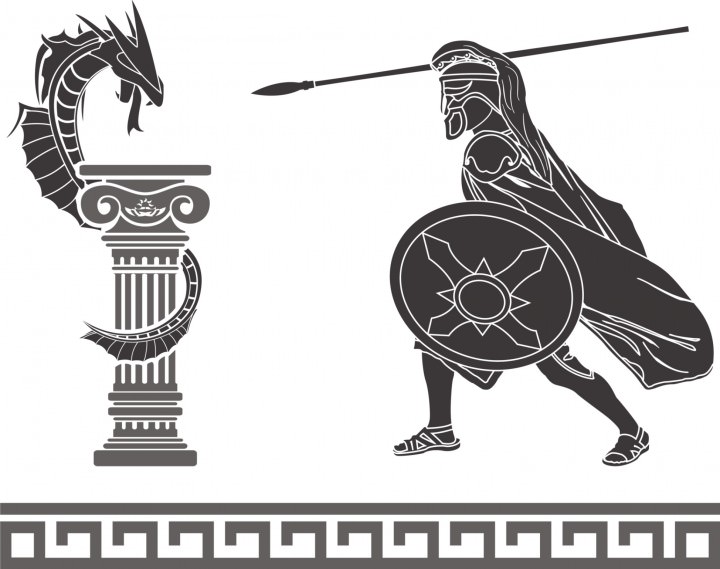 In Greek Mythology, there are twelve main Olympian gods. These gods have their own distinct personalities and relationships with each other. Ares, the God of War, is one of these Olympians and is the son of Zeus and Hera.

He is often portrayed as having a turbulent and erratic personality with a lust for the violence of war. In essence, the Greeks didn’t necessarily revere Ares because he represented the violent and reckless side of humanity.

Though Zeus is credited as being Ares’s father, one story indicates that Ares actually didn’t have a father. In some literature, Hera took a special herb that allowed her to conceive a child immaculately.

As a result of this, Zeus is portrayed as being an indifferent father. Once as an infant, Ares was actually kidnapped by giants and imprisoned in a bronze jar for several years and it was Zeus’s negligence that allowed for the kidnapping.

When Ares was rescued, Hera realized that additional measures needed to be taken to keep him safe. So, she moved him to Priapus. It is there that he received his care and training. He remained there until he was grown.

As you may recall, Athena is a goddess who is also associated with war. She represents everything that is calculating and strategic about war. This means that she is portrayed as having a fairly calm temperament considering she is surrounded by so much violence.

Ares, however, is almost the complete opposite of that. He is more erratic than calculating. He is seen as thirsty for blood and revels in the heat of battle. Not only that, he has a remarkable amount of courage.

Despite his violent temperament, he was also physically beautiful. He fathered many children from multiple partners. These children include Eros, Phobos, Deimos, and Harmonia. Eros, Phobos, and Deimos are often portrayed as his chief battle companions.

His most famous affair was with Aphrodite, the goddess of love and beauty. Aphrodite’s husband, Hephaestus, was the exact opposite of Ares. He was calm and mild mannered and was said to not be exciting enough to hold her interest. In fact, this liaison resulted in his temporary banishment from Olympus.

The Cult of Ares

Mainly, Ares was worshiped in an occasional fashion by armies that were about to go to war. Though, there were temples dedicated to Ares in a few locations, such as the Agora in Athens.

Otherwise, he didn’t have as established of a cult following as some of the other gods and goddesses. Most of his followers were those who also loved war and are therefore not shown as people who have high standards of morality.

Ares, the god of war, is portrayed as being one of the least popular of the Olympian gods. Even though he was handsome, he also represented the fairly violent side of humanity. He did have a cult following, though, and people also sacrificed to him before leaving for battle.