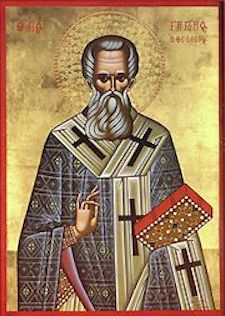 It’s true that learning about thee saints is important to Orthodox Christians, and celebrating their lives is an integral part of the church calendar. Most of the saints each have a feast day and those who are named after them celebrate their name day on the saint’s feast day.

Saint Gregory is one of those saints whose lives we celebrate. He is known for being a father and teacher during the early days of the church. His feast day is celebrated on January 25th and he is remembered again with the rest of the Three Hierarchs, Basil the Great and John Chrysostom, on January 30th. Here is more information about Saint Gregory:

During his life, he studied in many places including Caesaria, Alexandria, and Athens. When he was sailing from Alexandria to Athens, he nearly lost his life. He also hadn’t been baptized yet but thankfully, the Lord saved him from death. He was baptized shortly after and gave his life to God after that.

He became acquainted with Saint Basil during his time in Athens and after Gregory’s studies he and Basil became ascetics together. They lived in a monastery in Pontus for some time where they served the Lord. After that, Gregory’s father ordained him as presbyter of Church of Nazianzus and then Saint Basil ordained him as a bishop. He also wrote many religious works that are still being read today. He died in 391 AD at the age of 62.

Saint Gregory’s feast day is on January 25th of each year. Here are the hymns that are sung or chanted during his feast day:

The pastoral flute of your theology conquered the trumpets of orators.
For it called upon the depths of the Spirit
and you were enriched with the beauty of words.
Intercede to Christ our God,
O Father Gregory, that our souls may be saved.

O Glorious One, you dispelled the complexities of orators with the words of your theology.
You have adorned the Church with the vesture of Orthodoxy woven from on high.
Clothed in this, the Church now cries out to your children, with us,
“Hail Father, the consummate theological mind.”

Saint Gregory’s feast day is on January 25th, and he is celebrated again on January 30th with the rest of the Three Hierarchs. Check the Name Day page for more information about other Orthodox Christian name days.