Written by GreekBoston.com in Modern Greek History Comments Off on The History of the Greek Language 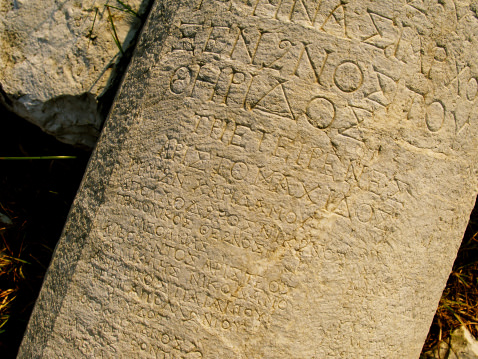 One thing that is fascinating about the Greek language is that when you look at the Indo-European language chart, Greek stands on its own. Nearly every language in that family, whether it is Latin or Germanic, developed into other languages over time. For example, Spanish, French, and Italian, were derived from Latin.

Yes, the Greek language has its own branch of the Indo-European language tree. However, that doesn’t mean that the language itself hasn’t changed and evolved since ancient times. What follows is an overview of the history of the Greek language.

During the Classical Period of Ancient Greece, the language developed into several dialects. The two major dialects of that time period were called Ionic and Attic. Attic was spoken in the Athenian city-state. Eventually, the two dialects morphed into a form of Greek known as the Attic-Ionic dialect.

During the Hellenistic period, the Greek language developed into what we now know as Biblical Greek. This is the Greek language with which certain parts of the New Testament were written. Prior to that, however, Hellenistic Greek was the language spoken during Alexander the Great’s time. He spread the language so far east that it was adapted by most of the ancient world as a second language. This dialect of Greek is also referred to as “Koine”.

During the “Koine” period of the Greek language, there were people who longed for the classical period. They held the Attic dialect as the highest standard of Greek. This developed into a period known as “Atticism”. This movement greatly influenced Greek literature and continues to do so to this day.

Directly following Hellenistic Greek and Atticism, Byzantine Greek took place during the rule of the Byzantine Empire. This empire began when Constantinople was established in 330 AD and fell in 1453 AD when the Turks defeated the city. Today, Constantinople is known as Istanbul. This led the Greeks into a dark period of Ottoman rule that lasted four hundred years.

During the Ottoman rule over the Greeks, the language slowly evolved into the Greek that we know today. It is interesting to note that the island of Crete managed to prevent the Ottoman Empire from controlling them until 1669 AD. Modern Greek folk literature can be traced to the poetry and literature that came from this island prior to their occupation.

After the Ottoman Empire fell in 1830, the Greek people sought to establish their standard Greek dialect. The Greek dialects spoken in Athens and the Peloponnese became the standardized language spoken in modern Greece. However, even now, the language continues to change and evolve – especially with outside cultural influence being more prevalent.