Written by GreekBoston.com in Greek Mythology Comments Off on Agamemnon’s Role During the Trojan War 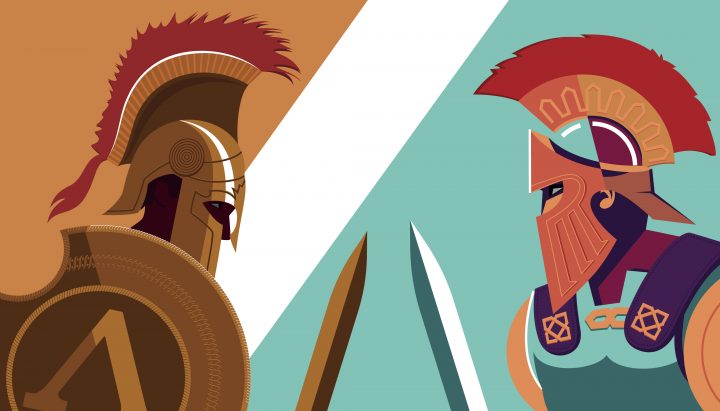 Thought to be the greatest war in classical mythology, the Trojan War is one of the most well-known wars. Agamemnon, king of Mycenae, played an integral role in the war. Here’s what you need to know about the role Agamemnon played in the Trojan War.

Thyestes fathered a son named Aegisthus with his own daughter Pelopia. Aegisthus would later murder Atreus, allowing Thyestes to take over the throne. At this time, Agamemnon and his brother Menelaus found refuge with Tyndareus, the king of Sparta. Agamemnon married Tyndareus’ daughter Clytemnestra with whom he had four children. Menelaus married Clytemnestra’s sister Helen.

Start of the Trojan War

While there were various components that went into the start of the Trojan War, one important element involved Queen Helen of Sparta who was taken by Trojan Prince Paris. The Trojan War initially began due to a quarrel between Athena, Hera, and Aphrodite, three goddesses. The fight was over a golden apple that was thrown by the goddess of strife during the wedding of Thetis and Peleus.

To deal with the feud, Zeus sent the three goddesses to Paris, the prince of Troy. Paris had given the apple to Aphrodite in exchange for the love of Helen. Aphrodite kept her side of the bargain and Helen, wife of Menelaus, either eloped with or was abducted by Paris.

Being the more powerful of the two brothers, Agamemnon assembled an army of princes and they set sail for Troy only to incur the wrath of goddess Artemis. Artemis is said to have been upset at the thought of how many men would die at Troy.

Another account says she was angry after hearing that Agamemnon considered himself to be as good a hunter as she was. Whatever the case, the trip was slowed by lack of wind as well as a plague. In order to appease Artemis, Agamemnon had to sacrifice his daughter Iphigeneia. Some versions say that Agamemnon was willing to sacrifice his daughter, but Artemis accepted a deer instead and took Iphigeneia to Taurus.

During the Trojan War, Agamemnon was the commander-in-chief. He is said to have killed as few as sixteen Trojan soldiers and as many as hundreds during the war. When Troy was finally captured, Priam’s daughter Cassandra was awarded to Agamemnon as part of the prizes of war. Upon his return home, Agamemnon discovered the affair between his wife and Aegisthus. Clytemnestra and Aegisthus then murdered Agamemnon, his comrades, and Cassandra.

Agamemnon, though considered brave, was haughty and thought greatly of his position, which insulted Achilles and Chryses. This is thought to have brought much disaster to the Greeks.

All About the Ancient Greek Philosophy of Pythagoreanism