Home > Greek Culture > Greek Mythology > All About the Goddess Athena

Written by GreekBoston.com in Greek Mythology Comments Off on All About the Goddess Athena 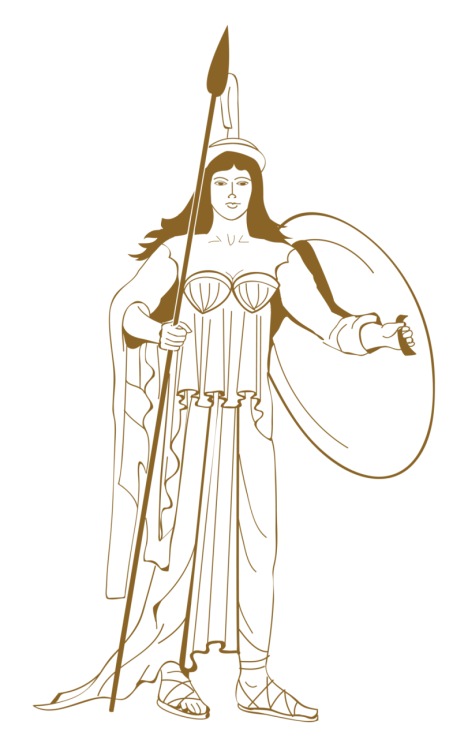 Athena, one of the Olympic Gods, is primarily considered the goddess of wisdom, the arts, war and military victory, and also military strategy. Her parents were Zeus, the king of the gods, and Metis, who was a Titan. Her symbols include armor, olive trees, snakes, and owls. She is normally depicted either dressed in full armor or in a long gown.

As far as goddesses go, Athena is said to have been Zeus’s favorite and many think it is because of how she was born. There are many versions of her birth, but all the stories agree that she sprung from Zeus’s forehead fully grown and clothed in battle armor. It is because of where she came from that Athena is largely associated with wisdom and other intellectual pursuits, such as battle strategy and the arts.

According to the stories, Athena never had a lover, consort, or husband and she was highly respected for her sense of modesty. She is, therefore, referred to as “Athena Parthenos” or “Virgin Athena”. The Parthenon in Athens was built for her and is her most famous temple. Sexual modesty was a valued trait for the patriarchal society of Ancient Greece.

Athena was worshipped throughout Ancient Greece. She was the patron goddess of several places, including Athens. In fact, Athens is the site of her most famous temple, the Parthenon, which is still standing today.

She is often depicted as leading soldiers into battle, something that caused her to be worshipped all over. She was the patron goddess of many popular heroes such as Odysseus, Jason, and Hercules.

Note that even though she is associated with war, she was very reluctant to use violence to solve conflict. As an intellectual, she preferred to use her wisdom to avoid conflict. If she did have to fight, she did so with a sense of purpose and effectiveness.

The Lady of Athens

According to the stories, both Athena and Poseidon wanted to be the main patron deity of Athens. To resolve this, they had a competition. Each would present Athens with a gift. The Athenians would then vote and choose which gift they preferred, making the winner the Patron.

Poseidon’s gift was a salt-water spring, which gave Athens control of the sea. However, since the water contained salt the people couldn’t drink it. Athena gave the people the olive tree, which provided both nourishment and trade. Ultimately, the people chose Athena’s gift.

There are two main ways Athena is typically depicted in artwork. She is either seen wearing a full-length gown, called a chiton, or as wearing a full suit of armor while bearing a shield. In a popular sculpture, called Mourning Athena, she is depicted weary from battle and resting on her staff.

Athena is one of the most popular of the Olympic goddesses, mainly because she represented wisdom and intellectual thought, traits that were highly valued to the Ancient Greeks. She was also the goddess of war, or more specifically, military strategy. Her influence can still be found today at the Parthenon in Athens.