There are some stories throughout Greek mythology that involve creatures known as the Giants, or Gigantes in Greek. In our modern minds, we envision giants to be exceptionally tall creatures that also possess great strength. In Greek mythology, however, the Giants weren’t necessarily tall, but they were still strong. But who are they, really? Here is some more information about them and how they relate to the mythological stories:

According to the stories, the Giants were the children of Gaia, or the Titan goddess of the earth. The ancient writer Hesiod indicates that the parents of the Giants were Gaia and Uranus. However, Uranus didn’t like his children and instead of letting Gaia give birth, he imprisoned his kids inside of Gaia. When given the chance, Cronus castrated his father, thus preventing him from siring any more children. After that, Gaia gave birth to the race of Giants. In an alternate story, the writer, Apollodorus, indicates that Gaia and Uranus were parents of the Giants but he doesn’t associate the Giants with the story of Uranus’ castration.

Here’s an overview of some of the Giants’ names and attributes:

It is interesting to note that most of the stories that exist about the Giants took place during the Gigantomachy, a war that only Apollonius seemed to have referred to.

One of the most famous stories that involves the Giants is the Gigantomachy, which also involved the Olympian gods. This struggle was actually an all out war where the Giants and Olympian gods fought for control of the universe. Ultimately, the Olympians were victorious. Not much is truly known about this battle because both Homer and Hesiod, the two writers who had the most to say about Greek mythology, never mentioned it. Apollonius was the main writer who talked of this war, so much of the story is based on his knowledge. However, there is some debate as to whether or not Apollonius was actually referring to the Giants or if he was actually confusing them with the Titans. The Gigantomachy has some similarities to the Titanomachy, which also pitted the Olympians and the Titans against each other for control of the Cosmos.

As you can see, there is some debate as to the true nature of the Giants. The widely accepted story is that Gaia gave birth to them and that their father was Uranus. As to the rest of the mythology around them, there are some discrepancies. 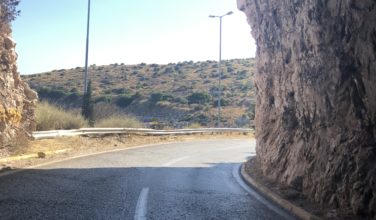 History of Tunnels in Greece