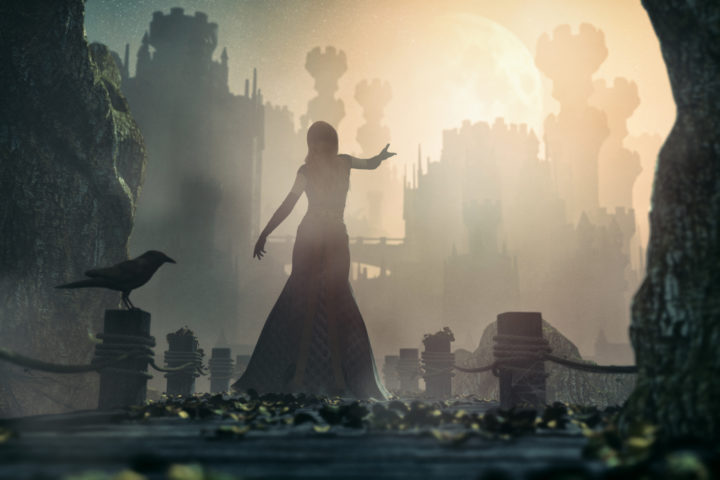 Koronis (Coronis) was a Thessalian princess in Greek mythology. She was the daughter of Phlegyas of Larissa, king of the Lapiths and lived on Lake Beobis. Although not exceptionally well known by many who are familiar with Greek mythology, Koronis was a mortal lover of Apollo, the son of Zeus. Koronis also gave birth to one of Apollo’s children, Asclepius. The tale of Koronis is a tragic one that also serves as a fable regarding crows.

Tales of Koronis mention her exceptional beauty. Because of this, the god Apollo loved and seduced her in her home town in Thessaly. During this time, Koronis fell pregnant with Apollo’s child, Asclepius. When Apollo left Lake Beobis and the now pregnant Koronis, he also left a white crow to guard her in his absence. Accounts vary on whether the white bird was a crow or a raven.

While Apollo was away, Koronis met a mortal man named Ischys. Ischys was the son of a chieftain in Thessaly. Despite the fact that Apollo stilled loved Koronis and she was still pregnant with his child, Koronis fell in love with Ischys. In some versions of the tale Koronis and Ischys married, resulting in Koronis marrying far below her social class as a princess.
Regardless of whether Koronis and Ischys married, the crow Apollo had left to guard her saw her infidelity and left to give Apollo its report.

Apollo was filled with jealousy when he received the crow’s report. In a rage, he burned the crow’s feathers black, stating that the crow should have pecked out Ischys’ eyes when it saw Koronis’ infidelity. By some accounts, Apollo returned to Thessaly and killed Koronis and Ischys himself. In other versions of the tale, Apollo asked his twin sister, Artemis, the goddess of the hunt, to kill Koronis with her arrows. An additional tale exists in which Apollo turns Koronis into a crow.

Once Koronis had been killed, her still pregnant body was placed on a funeral pyre to be burned. In all accounts, Apollo felt guilt for killing his unborn son. Before she was burned, he cut Koronis’ womb open to remove and rescue the child. He named the child Asclepius and gave him to a centaur to raise.

In Greek mythology, there are the major players, such as the Olympian gods and goddesses and demigods such as Hercules. Others, such as Koronis, have less of a role. However, that doesn’t make her any less important to Greek mythology than some of the other characters. She is just as much a part of the stories as the others.