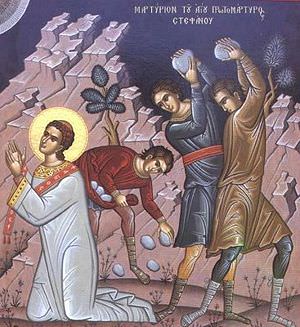 There are plenty of saints that are important to the life of the Orthodox Church and many Orthodox Christians are named after them. Each year, they celebrate their name day on the saint’s feast days.  Saint Stephen’s martyrdom is something that the church remembers each year on December 27th. He is also remembered on June 15th of each year. We also honor his relics on August 2nd of each year. Those who celebrate their name day in honor of him typically celebrate it on June 15th. Here’s more information about who Saint Stephen was and his contribution to the Orthodox Christian Church:

Saint Stephan, who is also referred to as Apostle Stephen or Apostle Stephen the Protomartyr, is most known for his work at establishing the early church and for also becoming a martyr. He was one of the first seven deacons who were ordained in the Orthodox Church by the Apostles who then served in Jerusalem, which means that he was considered to be an archdeacon. However, besides the work that he did for the church, not much is known about his birth and early life. We do, however, have a record of his death since he was martyred.

During the time that he was alive, Christians were being regularly persecuted for their beliefs. The people actually expressed outright hatred about Stephen, and as a result, they continually lied about him to the public. This eventually directly caused his martyrdom. Before that, however, he ignored his persecutors and publicly performed miracles and preached the good news of Christ.

Saint Stephen eventually lost his life as a martyr and he was stoned to death. Though Christians were martyred in the face of persecution during the early days of the church, Stephen’s martyrdom was set apart from the rest. He is considered to be the first martyr and his death is said to have been witnessed by Christ Himself while he looked down from heaven.

There are some hymns that can be found in the Orthodox Christian church service that celebrate Saint Stephen. Here are the details:

O First Martyr and Apostle Of Christ,
Thou hadst fought the good fight.
And didst expose the perversion of the persecutors,
For when thou wast killed by stoning at the hands of wicked men,
Thou didst receive a crown from the right hand on high,
And didst cry out to God saying,
“O Lord do not charge this sin against them!”

Saint Stephen’s name day is typically celebrated on June 15th. He is also remembered on August 2nd and December 27th of each year. Check the Name Day page for more information about other Orthodox Christian name days.