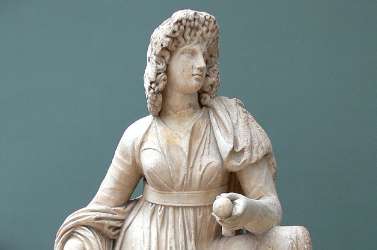 In Greek mythology, there was a muse who created the inspiration for every aspect of artistic and scientific thought. The Ancient Greeks believed that with the muses, they could achieve great things. Melpomene, the ancient muse responsible for tragedy, is one of these muses. Here’s more information about who Melpomene is and how she came to become the muse of tragedy:

The name “Melpomene” is actually derived from an Ancient Greek word meaning, “to celebrate with dance and song.” In the early days of her worship, she was considered to be the muse of singing. Over time, the way the people viewed her changed and she became the muse of tragedy. In some traditions, she remained the muse of both singing and tragedy, depending on which tradition you adhere to.

However, in most works of art depicting her, she is usually shown holding a mask, which is the Ancient Greek symbol for tragic theater. So how did it come to be that she changed? People don’t really know, but it is usually speculated that she represented tragedy after the Greeks invented theater and regularly performed tragic plays. When she first came into being, theater hadn’t been invented yet. She became the Muse of Tragedy during the classical period of Ancient Greece.

Melpomene had eight other sisters and each one of them was a muse like herself. It is said that the nine muses came into being because they were the daughters of Zeus, the father of the gods, and Mnemosyne, the Titan goddess of memory. Zeus and Mnemosyne came together nine days in a row, and each of these days, one of the muses was conceived.

Her sisters include Caliope, Clio, Euterpe, Erato, Polyhymnia, Thalia, and Urania and they were born around the same time as she was. As a result of this, the muses were depicted as having a close relationship and were often depicted together. However, not much is known about her besides that, aside from the fact that she was thought to be the mother of some of the sirens.

How Melpomene Was Depicted

Much of the way she was depicted came about after she became the Muse of Tragedy. She was often associated with Dionysius and would often be depicted with them. In some images, she is shown wearing a wreath made out of grapevines. Dionysius himself was often shown with her. One thing that remained certain, however, is that she was always pictured with the mask, which represents tragedy. Dionysius was often pictured wandering through the forests, sometimes alone, and perhaps he encountered Melpomene along the way.

Melpomene is the Ancient Greek muse of tragedy, and she is invoked when a tragedy is either written or performed. However, aside from the story of her birth and the fact that she is often associated with Dionysius, not much is known about her.