Written by GreekBoston.com in Greek Mythology Comments Off on Mythological Story of Narcissus and Echo 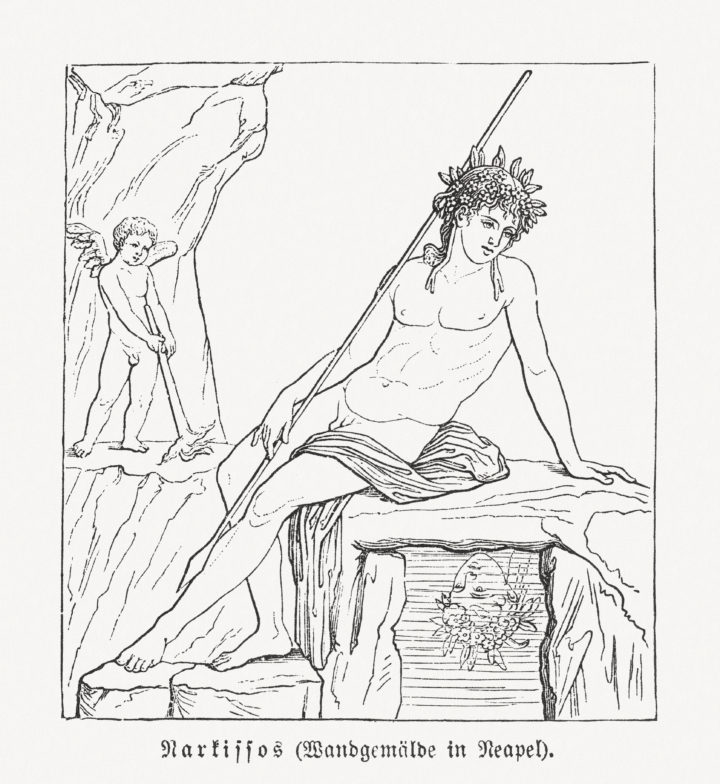 Narcissist is one of those classic Greek mythological figures whose story people remember to this day. The term “narcissism” has even been named after him, and the word itself was inspired by the events of his life. The backbone of this story is to showcase how it feels when someone’s love isn’t returned to them, and it also highlights how vengeful some of the Greek characters from this stories could really be!

Get to Know Zeus

In order to understand this story, you’ll need to know a little bit about Zeus’s character. He was the King of the Gods, and at times, he really showed how important this was to him. In fact, he could get a bit power hungry at times. Because of this, he had many affairs and cheated his wife, Hera, with other goddesses, creatures, and even human women. He was also known as a clever trickster and he would always find a way to distract Hera from noticing his affairs.

Because Zeus cheated so much, Hera became suspicious even when her husband wasn’t being unfaithful. In one instance, Zeus employed Echo, who was a wood nymph and master storyteller, to spin tales while Zeus was away with other women. Hera grew suspicious, however, and believed Echo to be the object of Zeus’s affections.

Furious about her husband’s imagined infidelity with Echo, Hera created a curse that robbed Echo of her storytelling abilities. She was cursed to only be able to repeat the last words said to her; never to speak her own words again.

Tragedy of Echo and Narcissus

Narcissist was a young boy of unrivaled beauty, in Greece or anywhere else. One day, Narcissus went hunting in the woods with friends, but he became separated from them. This is when Echo spotted him and fell deeply, madly in love. Obviously, she was unable to tell him how she felt.

When she attempted to speak to him, a confusing conversation ensued because Hera’s punishment to Echo caused her to have difficulty speaking. Because of this curse, Narcissus pushed her away, believing himself to be too good to go around having affairs with wood nymphs. His rejection broke Echo’s heart.

Echo, like many of us undergoing breakups, retreated to a cave and stopped eating until she wasted away. Eventually, she died, leaving only her cursed voice.

For his cruel rejection of Echo, Narcissus was punished by Nemesis, Greek Goddess of Revenge. The beautiful young boy was cursed to fall in love with his own reflection, as seen in the waters of a pond outside of Echo’s cave. Nemesis isn’t as well known as some of the other gods and goddesses, but since revenge is a theme in Greek mythology his role was an important one.

Falling desperately in love with himself, Narcissus too stopped eating and wasted away. His last words to himself were, “Farewell dear boy. Beloved in vain.” Echo’s disembodied voice repeated his words back to him before he died.

There are many things to take away from this story. It’s true that the rejection of love could cause pain. However, this story is also a warning not to become too self absorbed.